Cerezo Osaka (セレッソ大阪, Seresso Ōsaka) is a J. League football team, currently playing in the J2 League. The team name Cerezo (cherry tree in Spanish) is also the flower of Ōsaka city.[1] The official home towns for the team are Osaka City and Sakai City. 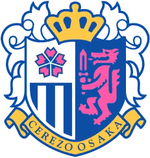 The team, originally called Yanmar Diesel, started in 1957 as the company team of Yanmar and was an original founder of the now-disbanded Japan Soccer League. With four Japanese league titles to its credit, it was a mainstay of the JSL First Division until 1990 when it was first relegated, and thus joined the former Japan Football League in 1992.

In 1993, the club incorporated as Osaka Football Club Ltd., and adopted the name Cerezo after a public contest.[2] In 1994, it won the JFL championship and was promoted to the J1 League in 1995. This also coincided with a run to the finals of the Emperor's Cup, which they lost to long-time league rivals Bellmare Hiratsuka.

In 2005 they came close to becoming J-League champions, and topped the league into the last match day. In their final match, they led F.C. Tokyo with minutes to go and were on course to win the title. However, Tokyo equalized in the 90th minute, and a number of other late goals around Japan meant they finished 5th. Arch-rivals Gamba Osaka, ended up winning the title. Cerezo returned to J2 for the 2007 season after finishing second to last in 2006. In 2009 they were promoted and returned to the top division. In 2014 they ended their season in 17th place. As a result, the team will be playing in Division 2 this 2015 season.

During the Yanmar Diesel days in the late 1970s to mid-1980s, the uniform was all-red reminiscent of Liverpool F.C.

The home towns for the team are Osaka, and Sakai, Japan. The team plays at Kincho Stadium, with some bigger games played at Yanmar Stadium Nagai.[3]

The main team mascot is a wolf, nicknamed Lobby.

His full name is Noble Valiente Hache Lobito de Cerezo, which roughly translates to "a noble and brave son of a wolf from the Cerezo family, of good lineage".

The other team mascot is Madame Lobina, Lobby’s mother, who supports her son and Cerezo Osaka enthusiastically at many of the matches. Her full name is Elegante Esplendida Madame Lobina de Cerezo, which roughly translates to "elegant and splendid Madam wolf from the Cerezo family, of good lineage".[4]

Cerezo's biggest rival is fellow local team Gamba Osaka. The matches played against Gamba are referred to as the Osaka derby.

As of 29 September 2016.[5] Note: Flags indicate national team as defined under FIFA eligibility rules. Players may hold more than one non-FIFA nationality.

The following players have represented their country at the World Cup whilst playing for Cerezo Osaka: