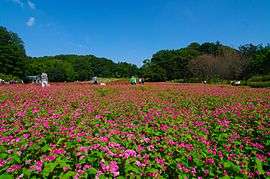 Namegawa (滑川町, Namegawa-machi) is a town located in Hiki District, Saitama Prefecture, in the central Kantō region of Japan. As of 1 February 2016, the town had an estimated population of 18,294 and a population density of 616 persons per km². Its total area was 29.68 square kilometres (11.46 sq mi).

Namekawa is located in a hilly region of central Saitama Prefecture, approximately 60 kilometers from central Tokyo.

The village of Namegawa was created on November 3, 1954 by the merger of the villages of Fukuda and Miyamae in Hiki District, Saitama. It was elevated to town status on November 3, 1984. Proposals to merge Namegawa with one or more of its neighbors have been made in 2003, 2004, 2007 and 2008 without success.

The economy of Namegawa is largely agricultural, although it is also a bedroom community to a significant percentage of the working population, who commute to nearby Saitama City or Tokyo.

Namegawa has three elementary schools, one middle school and one high school.