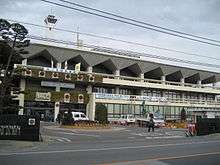 Kawaguchi (川口市, Kawaguchi-shi) is a city located in Saitama Prefecture, in the central Kantō region of Japan. As of 1 February 2016, the city had an estimated population of 578,727 and a population density of 9340 persons per km². Its total area was 61.95 square kilometres (23.92 sq mi). It is the Greater Tokyo Area's 9th most populated city (after Hachioji) and second largest in Saitama Prefecture.

Kawaguchi is located near the center of the Kantō Plain in southern Saitama Prefecture, and is bordered by the Tokyo wards of Kita-ku and Adachi-ku to the south. The city area is mostly flat and mainly residential except for the Omiya tableland, which occupies part of the north and east area. The Arakawa River runs across the border with Kita-ku to the south.

As of May 1, 2010, registered population was 516,409, including 20,808 alien residents, continuing a trend of population growth in the city since 1933 when the city was founded. There has been a gradual increase in the number of non-Japanese residents living in the city because of the convenient location to Tokyo and relatively low rent. Now, the number of people from China is the largest, followed by Korea and Philippines.[2]

Kawaguchi is a typical suburb city of Tokyo metropolitan area, where population greatly changes between daytime and nighttime due to commute to big cities, especially to Tokyo. In mid 1990s, population growth rate declined, but recent apartment construction boom in the city helps increase population growth rate again. The number of children continues to decrease in accordance with the decline of number of birth: 4,735 in 2009 down from the highest number of 7,932 in 1971. By contrast, the rate of people over the age of 65 is increasing, approximately 18.5% as of January 1, 2010. Yet the number is below the national average.[1] 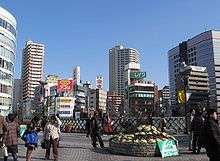 After the last ice age, during early and middle Jōmon period, most of the area which is now Kawaguchi was under sea level except for the area which is now Omiya Tableland. Ancient peoples living in this area left several shell middens, in which shells, Jōmon pottery, and pit houses have been discovered by archaeologists. Many Kofun period barrows were also found in Kawaguchi, however many have also been destroyed by urban development. From the Heian period onwards, Kawaguchi was part of Musashi Province. The name “Kawaguchi” appears in the Kamakura period chronicle Gikeiki, but it is not proven that this name designated current area of Kawaguchi.

During the Edo period, Kawaguchi-juku developed as a post station on the Nikkō Onari Kaidō, a highway used by the Tokugawa shogun and daimyō to visit Nikkō Tōshō-gū. Towards the Bakumatsu period and into the Meiji period, the demand for metal products increased. Because of proximity to Tokyo and convenient water transportation using Arakawa River, Kawaguchi became the center of metal casting industry, for which it has remained famous until modern times.

The modern town of Kawaguchi was established within Kitaadachi District, Saitama on April 1, 1889 with the establishment of the municipalities system. Kawaguchi was elevated to city status on April 1, 1933 by the merger of Kawaguchi with the neighboring villages of Aoki, Minami-Hirayanagi and Yokozone. The city expanded by annexing the town of Hatogaya and villages of Shiba, Kamine and Shingō in 1940. However, Hatogaya separated from Kawaguchi in 1948 in accordance with the results of a referendum.

Kawaguchi has experienced many disasters, including flood, earthquake and war. The Arakawa River has inundated Kawaguchi countless times and ruined agriculture, which resulted in famines. Also the 1923 Great Kantō earthquake damaged buildings in Kawaguchi, killing 99 people.

Currently, the population of Kawaguchi continues to increase, and many tall apartment buildings are being built around train stations. This is because many casting foundries moved to suburban industrial parks and the former sites were turned into residential areas.[3]

On April 1, 2001 Kawaguchi was designated a special city, with increased local autonomy.

On October 11, 2011, Kawaguchi re-absorbed the city of Hatogaya. 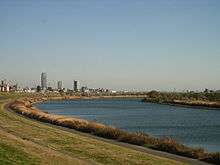 (all managed by the city)

(all managed by the city)

Kawaguchi has a highly developed bus network, mainly operated by Kokusai Kogyo Bus. The east region of the city is relatively far from train stations, many people use buses to the nearest train stations. Some bus routes have over twenty bus services an hour in the morning.[5] 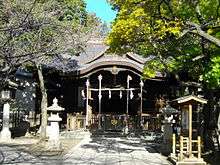