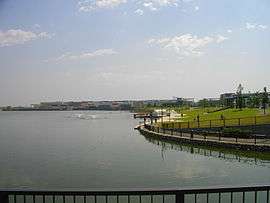 Koshigaya (越谷市, Koshigaya-shi) is a city located in Saitama Prefecture, in the central Kantō region of Japan. As of 1 February 2016, the city had an estimated population of 337,071 and a population density of 5,610 persons per km². Its total area was 60.24 square kilometres (23.26 sq mi). It is famous for producing daruma dolls.

Koshigaya is situated in eastern Saitama Prefecture, about 30 km from downtown Tokyo, along the banks of the Motoarakawa River.

Koshigaya-shuku prospered during the Edo period as a post station on the Nikkō Kaidō and the Ōshū Kaidō highways, and the town served as the temporary residence of the Tokugawa shogun after the 1657 Great Fire of Meireki which destroyed Edo Castle.

Koshigaya is a major regional commercial center with a diversified industrial base.