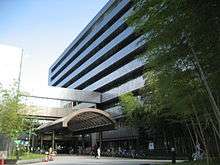 Tokorozawa (所沢市, Tokorozawa-shi) is a city located in Saitama Prefecture, in the central Kantō region of Japan. As of 1 February 2016, the city had an estimated population of 335,968 and a population density of 4660 persons per km². Its total area was 72.11 square kilometres (27.84 sq mi).

Located in the central part of the Musashino Terrace, about 30 km west of central Tokyo. Tokorozawa can be considered part of the greater Tokyo area; its proximity to the latter and lower housing costs make it a popular bedroom community. Most of Lake Sayama falls within city boundaries; Lake Tama also touches the south-western part of the city. The area around Tokorozawa Station's west exit is built up as a shopping district with several department stores. Prope Street is a popular shopping arcade.

Archaeological research has shown that the vicinity of Tokorozawa was settled from about 20,000 years ago.[1] Tokorozawa Shinmei Shrine has a traditional establishment of A.D. 110. Hatogamine Hachiman Shrine is believed to date from A.D. 921.

During the Kamakura period, the Kamakura Kaido ran through the area and the area was host to a series of battles fought in May 1333 that were part of the Genko War that ultimately ended the Kamakura Shogunate. These include the 1333 Battle of Kotesashi and the Battle of Kumegawa. Kotesashi was again the site of another battle nineteen years later.

During the Edo period (1603–1867) the area's major industry was silk textile production. It was also an important trading center, being located at the intersection of roads connecting Edo with the towns of Hachioji, Chichibu, Kawagoe and Fuchu.

The modern town of Tokorozawa was created within Iruma District, Saitama with the establishment of the municipalities system on April 1, 1889.

Tokorozawa became the site of Japan's first air base and air service academy in 1911. The base was used through the end of World War II and fell under the control of the United States Armed Forces after the war. The US returned most of its property in Tokorozawa to Japan in 1971, but retains a communications facility in the city which is operated by the 374th Airlift Wing of the Fifth Air Force, based at Yokota Air Base to the southwest. The facility houses antennas for communications with USAF aircraft in the region. Much of the land returned to Japan has been converted into the public Tokorozawa Aviation Memorial Park.

Tokorozawa was elevated to city status on November 3, 1950. In 1955, Tokorozawa annexed the neighboring villages of Yanase and Mikajima, and assumed its present boundaries. The development of large scale public housing and railroad development led to a rapid population increase in the 1960s. Tokorozawa was the site of the Clay pigeon shooting event in the 1964 Tokyo Olympics.[2]

Tokorozawa was designated as a special city with increased local autonomy in 2002. It currently meets the conditions to be designated as a core city but has yet to receive this designation. 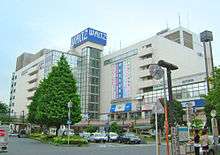 Tokorozawa houses the Tokyo Area Control Center, which controls airspace in the Kantō, Jōetsu, Tōhoku, Chūbu, and Hokuriku regions and a portion of the Kansai region.[3]

Tokorozawa is the headquarters of Seibu Holdings, the parent company of Seibu Railway and Tokorozawa Station forms a hub in the Seibu Railway network which serves western Tokyo and southern Saitama. Tokorozawa is at the intersection of Seibu's two main lines, which respectively run to Ikebukuro Station and Seibu Shinjuku Station in central Tokyo. Several Seibu group companies, including its railway and bus divisions, are headquartered in the vicinity of Tokorozawa Station. Seibu owns an amusement park, baseball stadium (Seibu Prince Dome) and velodrome (Seibu-en Velodrome) in the "Seibu-en" district near Lake Tama in the southwestern corner of the city.

Tokorozawa is twinned with: 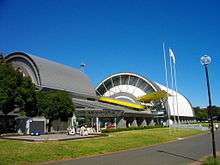 The Tokorozawa Matsuri is a festival held each year in October and features traditional Japanese parade floats ( mikoshi ), taiko drums, and samba dancers.

A two-day festival featuring music, cultural and sports exhibitions, community group activities and food booths takes place in late October in Kokukoen Park on the grounds of the former airfield. A similar 1-day festival, the Shimin Bunka Fair, takes place in early April in the park.

The city and local business community decorates the west side of Tokorozawa station with holiday lights from early December through mid March, and separate lighting ceremonies featuring local musicians, politicians, and sports figures are conducted for various portions of the lighted areas.