Vallabhacharya (1479–1531 CE), also known as Vallabha, was a devotional philosopher, who founded the Krishna-centered Pushti sect of Vaishnavism in the Braj region of India,[1] and the philosophy of Shuddha advaita (Pure Nondualism).[2][3]

Vallabha was born in a Telugu Brahmin family that had been living in Varanasi, who escaped to the Chattisgarh state while expecting Vallabha, during the turbulent times of Hindu-Muslim conflicts in late 15th century.[4] Vallabha studied the Vedas and the Upanishads as a child, then travelled throughout the Indian subcontinent over 20 years.[4] He became one of the important leaders of the devotional Bhakti movement. The hagiographies written by his followers, just like those for other Bhakti leaders, claim that he won many philosophical debates against the followers of Ramanuja, Madhvacharya and others, had visions and miracles.[4]

He is the Acharya and Guru within the Pushti sub-tradition, which he founded after his own interpretation of the Vedanta philosophy. Vallabha rejected asceticism and monastic life, suggested that through loving devotion to God Krishna, any householder could achieve salvation – an idea that became influential in western Uttar Pradesh, Rajasthan and Madhya Pradesh.[5] He is associated with Vishnuswami,[6] and is the prominent Acharya of Rudra Sampradaya out of the four Vaishnava Sampradayas.[7]

He authored many texts including the Anubhashya (a commentary on Brahm Sutra), Shodash Granth or sixteen 'stotras' (tracts) and several commentaries on the Bhagavata Purana. Vallabha's writings and kirtan compositions focus on baby Krishna and his childhood pranks with Yashoda (unconditional motherly love), as well as a youthful Krishna in relationship (erotic mysticism) with cowherding women as the many lilas (pastimes) of Krishna, Krishna's protection of the good (divine grace) and his victory over demons and evils, all with allegory and symbolism.[5] His legacy is best preserved in the Braj region, and particularly at Nathdwara in Mewar region of India – an important Krishna pilgrimage center.[5]

The ancestors of Vallabhacharya hailed from the Andhra region and belonged to a long line of Telugu Vaidiki Brahmins known as Velanadu or Vellanatiya following the Vishnu Swami school of thought. According to devotional accounts, Krishna commanded his ancestor Yagnanarayana Bhatta that He would take birth in their family after completion of 100 Somayagnas (fire sacrifices). By the time of Yagnanarayana's descendant Lakshmana Bhatta who migrated to the holy town of Varanasi, the family had completed 100 Somayagnas. Vallabhacharya was born to Lakshmana Bhatta in 1479 A.D. (V.S. 1535) on the 11th day of the dark half of lunar month of chaitra at Champaranya. The name of his mother was Illamma.[1][8]

The period surrounding Vallabhacharya's birth was a tumultuous one and most of northern and central India was being influenced by Muslim invaders. It was common for populations to migrate in order to flee from religious persecution and conversion. On one such occasion, Lakshmana Bhatta had to urgently move out of Varanasi with his pregnant wife. Due to terror and physical strain of the flight suffered by the mother, there was a premature birth of the child, two months in advance. As the child did not show signs of life, the parents placed it under a tree wrapped in a piece of cloth. It is believed that Krishna appeared in a dream before the parents of Vallabhacharya and signified that He Himself had taken birth as the child. According to popular accounts, the parents rushed to the spot and were amazed to find their baby alive and protected by a circle of divine fire. The blessed mother extended her arms into the fire unscathed; she received from the fire the divine baby, gleefully to her bosom. The child was named Vallabha (meaning "dear one" in Sanskrit).[1]

His education commenced at the age of seven with the study of four Vedas. He acquired mastery over the books expounding the six systems of Indian philosophy. He also learnt philosophical systems of Adi Sankara, Ramanuja, Madhva, Nimbarka along with the Buddhist and Jain schools. He was able to recite a hundred mantras, not only from beginning to end but also in reverse order. At Vyankateshwar and Lakshmana Balaji, he made a strong impression on the public as an embodiment of knowledge. He was now applauded as Bala Saraswati.[1] After studying till age of 11, he went to Vrindavan.[8]

In the court Tuluva king Krishnadevaraya, a debate was conducted at Vijayanagara between the Vaishnavaites of Madhva and Shankarites over the philosophical question whether God is Dualistic or non-dualistic. Vallabhacharya participated in the discussion.

At the age of 12, Vallabhacharya, who had earned an epithet of Bala Saraswati was given the opportunity to discuss the question.[9] The discussion continued for 27 days in the conference hall. He was honoured with the kanakabhishekam ceremony by Krishnadevaraya on victory. The titles of ‘Acharya’ and 'Jagadguru' (world preceptor) were conferred on him. He was given vessels of gold weighing a hundred maunds. Vallabhacharya politely declined to accept them and distributed them among the poor brahmins and the learned after keeping only seven gold mohurs. They were used for preparing the ornaments of Govardhananatha.[8]

Vallabhacharya performed three pilgrimages of India, barefoot. He wore a simple white dhoti and a white cloth to cover the upper part of his body (known as ‘Upavarna’, literally "upper cloth" in Sanskrit). He gave discourses on Bhagavata at 84 places and explained the meanings of the Puranic text. This 84 places are known as Chaurāsi Baithak (चौरासी बैठक) and now they are places of pilgrimage. He stayed in Vraja for four months in each year.[1][8] 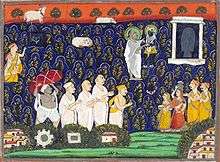 It is believed that when Vallabhacharya entered Gokul, he thought about the important question of restoring people to the right path of devotion. He meditated on Krishna who appeared to him in a vision in the form of Shrinathji,[10] a deity discovered by Madhavendra Puri and disclosed the 'Brahma Sambandha' (Sanskrit for "relation with Brahman, the supreme Godhead"), a mantra of self dedication or consecration of self to Krishna. During that time Damodardasa, his worthiest and most beloved disciple, was sleeping next to him. In the early morning, Vallabhacharya related this experience to Damodardasa and asked him — “Damala, did you hear any voice last night”? Damodaradasa replied that "I heard something but was not able to understand the meaning of it." Vallabhacharya then explained the meaning of the mantra and at that time he became the first Vaishnava initiated by Vallabhacharya. He wanted to preach his message of devotion to God and God’s grace called Pushtimarg (path of grace). He undertook three pilgrimages of India. He performed the initiation ceremony of religious rite by conferring on them the ‘Nama Nivedana’ mantra or the ‘Brahma Sambandha’ mantra. Thousands became his disciples, but 84 devoted servants are most famous and their life has been documented in Pushtimarg literature as the ‘Story of 84 Vaishnavas’.[1] He also met Vyas in his Himalayan cave and discussed Krishna and his flute.

He intended to remain a lifelong celibate but the deity-guru Vitthalanatha of Pandharpur commanded him to marry and live the life of a householder. Obeying his guru, he married Mahalaxmi and had two sons: Gopinath and Vitthalnath (also known as Gusainji).[11]

After having two sons, shree Gopinathji and shree Vithhalnathji (Gusainji), at the age of 52 he took samadhi (died) in the Ganga river in Manikarnikaghat of Kashi.

Based on Pushti Marg literature, in about 1530 A.D., Shrinathji commanded Vallabhacharya to leave the worldly life and to come near Him. It is said that Shrinathji had previously expressed His wish on two different occasions. The third command was accepted by Vallabhacharya as the last verdict. He reached Kasi and according to Vedic traditions, formally renounced the world by taking Sanyasa and a vow of silence. He lived in a hut made of leaves on the Hanuman ghat for about a week. He spent his last days in contemplation of Krishna and suffered agonies of separation from Him. The members of his family assembled near him for his last darshan. When asked about his advice, Vallabhacharya scribbled three and a half Sanskrit verses in the sand by way of counsel. To complete this message, it is believed that Krishna Himself manifested visually on the spot and wrote in the form of a verse and a half. This collection of verses is known as ‘ShikshaSloki’ in Pushti Marg literature. He entered into the waters of the Ganges on the day of Rath Yatra (a festival that is celebrated on the second or third day of the bright side of the lunar month of Ashadha). People witnessed a brilliant flame as it arose from the water and ascended to heaven and was lost in the firmament. This episode is known as AsurVyamohLila.[1]

Vallabhacharya represented the culmination of philosophical thought during the Bhakti Movement in the Middle Ages. The sect established by him is unique in its facets of devotion to Krishna, especially his child manifestation, and is enriched with the use of traditions, music and festivals. Today, though most of his followers reside in North and West India, his temples all over the world and he has many devout followers.

Vallabhacharya composed many philosophical and devotional books during his lifetime such as:

Also, in order to help devotees on this path of devotion, he wrote 16 pieces in verse which we know as the Shodasha Granthas. These came about as answers to devotees. The verses define the practical theology of Pushtimarga.

The Shodash Granthas (doctrines) serve as a lighthouse for devotees. They speak about increasing love for Shri Krishna through Seva (service) and Smarana (remembering). These doctrines are Mahaprabhu’s way of encouraging and inspiring devotees on this path of grace. The central message of the Shodasha Granthas is total surrender to the Lord. A Goswami can initiate an eager soul to this path of Shri Krishna’s loving devotion and service. The verses explain the types of devotees, the way to surrender and the reward for Seva, as well as other practical instructions. The devotee is nurtured by the Lord’s grace.