Nisargadatta Maharaj[1] (Marathi: निसर्गदत्त महाराज; 17 April 1897 – 8 September 1981), born Maruti Shivrampant Kambli, was an Indian Guru of nondualism, belonging to the Inchagiri Sampradaya, a lineage of teachers from the Navnath Sampradaya and Lingayat Shaivism.

The publication in 1973 of I Am That, an English translation of his talks in Marathi by Maurice Frydman, brought him worldwide recognition and followers, especially from North America and Europe.[2]

Nisargadatta was born at break of dawn on 17 April 1897, a full-moon day in the month of Chaitra, to Shivrampant Kambli and Parvatibai, in Bombay.[web 1] The day was also Hanuman Jayanti, the birthday of Lord Hanuman, hence the boy was named 'Maruti', after Lord Hanuman himself.[3][web 2][note 1] His parents were followers of the Varkari sampradaya,[web 3] an egalitarian Vaishnavite bhakti tradition which worships Vithoba. His father, Shivrampant, worked as a domestic servant in Mumbai and later became a petty farmer in Kandalgaon.

Maruti Shivrampant Kambli was brought up in Kandalgaon, a small village in the Ratnagiri district of Maharashtra, where he grew up amidst his family of six siblings, two brothers and four sisters, and deeply religious parents.[web 4] In 1915, after his father died, he moved to Bombay to support his family back home, following his elder brother. Initially he worked as a junior clerk at an office but quickly he opened a small goods store, mainly selling beedis – leaf-rolled cigarettes, and soon owned a string of eight retail shops.[web 5] In 1924 he married Sumatibai and they had three daughters and a son. 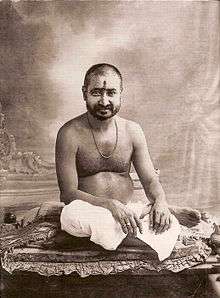 In 1933, he was introduced to his guru, Siddharameshwar Maharaj, the head of the Inchegiri branch of the Navnath Sampradaya, by his friend Yashwantrao Baagkar. His guru told him, "You are not what you take yourself to be...".[web 6] Siddharameshwar initiated him into the Inchegiri Sampradaya, giving him meditation-instruction and a mantra, which he immediately began to recite.[web 3] Siddharameshwar gave Nisargadatta instructions for self-enquiry which he followed verbatim, as he himself recounted later:

My Guru ordered me to attend to the sense 'I am' and to give attention to nothing else. I just obeyed. I did not follow any particular course of breathing, or meditation, or study of scriptures. Whatever happened, I would turn away my attention from it and remain with the sense 'I am'. It may look too simple, even crude. My only reason for doing it was that my Guru told me so. Yet it worked![4]

Following his guru's instructions to concentrate on the feeling "I Am", he used all his spare time looking at himself in silence, and remained in that state for the coming years, practising meditation and singing devotional bhajans:[web 7]

My Guru told me: "...Go back to that state of pure being, where the ‘I am’ is still in its purity before it got contaminated with ‘I am this’ or ‘I am that.’ Your burden is of false self-identifications—abandon them all." My guru told me, "Trust me, I tell you: you are Divine. Take it as the absolute truth. Your joy is divine, your suffering is divine too. All comes from God. Remember it always. You are God, your will alone is done." I did believe him and soon realized how wonderfully true and accurate were his words. I did not condition my mind by thinking, "I am God, I am wonderful, I am beyond." I simply followed his instruction, which was to focus the mind on pure being, "I am," and stay in it. I used to sit for hours together, with nothing but the "I am" in my mind and soon the peace and joy and deep all-embracing love became my normal state. In it all disappeared—myself, my guru, the life I lived, the world around me. Only peace remained, and unfathomable silence. (I Am That, Dialogue 51, April 16, 1971).[web 3]

After an association that lasted hardly two and a half years, Siddharameshwar Maharaj died on 9 November 1936.[5][web 3] In 1937, he left Mumbai and travelled across India.[web 8] After eight months he returned to his family in Mumbai in 1938.[6] On the journey home his state of mind changed, realizing that "nothing was wrong anymore."[web 3] He spent the rest of his life in Mumbai, maintaining one shop to earn an income.[web 3]

Between 1942–1948 he suffered two personal losses, first the death of his wife, Sumatibai, followed by the death of his daughter. He started to give initiations in 1951, after a personal revelation from his guru, Siddharameshwar Maharaj.[web 3]

After he retired from his shop in 1966, Nisargadatta Maharaj continued to receive and teach visitors in his home, giving discourses twice a day, until his death on 8 September 1981 at the age of 84, of throat cancer.[web 9]

Nisargadatta gave talks and answered questions at his humble flat in Khetwadi, Mumbai, where a mezzanine room was created for him to receive disciples and visitors. This room was also used for daily chantings, bhajans (devotional songs), meditation sessions, and discourses.[web 3]

Cathy Boucher notes that the Inchagiri Sampradaya emphasized mantra meditation from its inception in the early 19th century, but that the emphasis shifted toward a form of Self-enquiry with Sri Siddharameshwar.[7] Nevertheless,

Sri Nisargadatta Maharaj [...] still gave mantra initiation, with the underlying point being that the mantra was more than sound, it was the Absolute Itself which could be reverberated throughout life in all circumstance.[7]

Boucher also notes that Nisargadatta adopted a different mode of instruction, through questions and answers, for his western disciples.[7] Many of Nisargadatta Maharaj's talks were recorded, and formed the basis of I Am That as well as of the several other books attributed to him.[8]

Nisargadatta's "I Am That" in Hindi.

According to Timothy Conway, Nisargadatta's only subject was

...our real Identity as the birthless-deathless, infinite-eternal Absolute Awareness or Parabrahman, and Its play of emanated universal consciousness. For Maharaj, our only "problem" (an imagined one!) is a case of mistaken identity: we presume to be an individual, and, originally and fundamentally, we are not an individual, we are intrinsically always and only the Absolute.[web 3]

The life force [prana] and the mind are operating [of their own accord], but the mind will tempt you to believe that it is "you". Therefore understand always that you are the timeless spaceless witness. And even if the mind tells you that you are the one who is acting, don't believe the mind. [...] The apparatus [mind, body] which is functioning has come upon your original essence, but you are not that apparatus.[9]

According to Conway, awareness of the Absolute could be regained by

... a radical disidentification from the dream of "me and my world" via intensely meditative self-inquiry (atma-vicara) and supreme Wisdom-Knowledge (vijñana or jñana). "I know only Atma-yoga, which is 'Self-Knowledge,' and nothing else.... My process is Atma-yoga, which means abidance in the Self."[web 3]

Nisargadatta was critical of a merely intellectual approach to nondual Truth.[web 3] He had a strong devotional zeal towards his own guru,[web 3] and suggested the path of devotion, Bhakti yoga, to some of his visitors, as he believed the path of knowledge, Jnana yoga was not the only approach to Truth. Nisargadatta also emphasized love of Guru and God,[10][web 3] and the practice of mantra repetition and singing bhajans, devotional songs.[web 3][note 2]

Among his best known disciples are Sailor Bob Adamson, Stephen Wolinsky, Jean Dunn, Alexander Smit, Douwe Tiemersma, Robert Powell, Timothy Conway, Wayne Dyer[11] and Ramesh Balsekar. A less well known disciple is Ramakant Maharaj, who received the naam mantra from Nisargadatta in 1962, spent the next 19 years with the master.[web 10][web 11] and claims to be "the only Indian direct disciple of Shri Nisargadatta Maharaj" who offers initiation into this lineage.[web 12] Sachin Kshirsagar, who has published a series of books on Nisargadatta in the Marathi language[web 13] and also re-published Master of Self Realization, says to have received the Naam (Mantra) in a dream from Shree Nisargadatta Maharaj in Oct., 2011.

David Godman gives the following account of an explanation by Nisargadatta of the succession of Gurus in the Inchagiri Sampradaya:

I sit here every day answering your questions, but this is not the way that the teachers of my lineage used to do their work. A few hundred years ago there were no questions and answers at all. Ours is a householder lineage, which means everyone had to go out and earn his living. There were no meetings like this where disciples met in large numbers with the Guru and asked him questions. Travel was difficult. There were no buses, trains and planes. In the old days the Guru did the traveling on foot, while the disciples stayed at home and looked after their families. The Guru walked from village to village to meet the disciples. If he met someone he thought was ready to be included in the sampradaya, he would initiate him with mantra of the lineage. That was the only teaching given out. The disciple would repeat the mantra and periodically the Guru would come to the village to see what progress was being made. When the Guru knew that he was about to pass away, he would appoint one of the householder-devotees to be the new Guru, and that new Guru would then take on the teaching duties: walking from village to village, initiating new devotees and supervising the progress of the old ones.[web 14]

According to David Godman, Nisargadatta was not allowed by Siddharameshwar to appoint a successor:

Siddharameshwar told him that he could teach and give out the Guru mantra to anyone who asked for it, but he wasn't allowed to appoint a successor. You have to remember that Nisargadatta wasn't realised himself when Siddharameshwar passed away.[web 14]

Nisargadatta started to initiate others in 1951, after receiving an inner revelation from Siddharamesvar.[web 3] Nisargadatta himself explains:

The Navnath Sampradaya is only a tradition, way of teaching and practice. It does not denote a level of consciousness. If you accept a Navnath Sampradaya teacher as your Guru, you join his Sampradaya. Usually you receive a token of his grace - a look, a touch, or a word, sometimes a vivid dream or a strong remembrance.[12]

David Godman also recalls the following conversation on the understanding by his visitors of his teachings:

[Nisargadatta:] 'Why do I waste my time with you people?' he exclaimed. 'Why does no one ever understand what I am saying?'


[Godman:] I took my chance: 'In all the years that you have been teaching how many people have truly understood and experienced your teachings?'
[Nisargadatta:] He was quiet for a moment, and then he said, 'One. Maurice Frydman.' He didn't elaborate and I didn't follow it up.[web 14]