All of the armories in New York State are run directly or indirectly by the DMNA. The DMNA headquarters, located in Latham, New York[3] near Albany, is within 8 miles of both the Knolls Atomic Power Laboratory and the General Electric Research and Development facility in Niskayuna, New York.

The New York National Guard consists of the 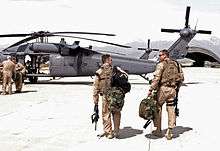 The Constitution of the United States specifically charges the "Militia of the Several States," now embodied as the National Guard, with dual federal and state missions. In fact, the National Guard is the only United States military force empowered to function in a state status. Those functions range from limited actions during non-emergency situations to full scale law enforcement of martial law when local law enforcement officials can no longer maintain civil control.

The National Guard may be called into federal service in response to a call by the President or Congress.

When National Guard troops are called to federal service, the President serves as Commander-in-Chief. The federal mission assigned to the National Guard is: "To provide properly trained and equipped units for prompt mobilization for war, National emergency or as otherwise needed."

Unlike United States Army Reserve members, National Guard members cannot be mobilized individually (except through voluntary transfers and Temporary Duty Assignments TDY), but only as part of their respective units. However, there have been a significant number of individual activations to support military operations (2001-?); the legality of this policy is a major issue within the National Guard.

Previous Chiefs of Staff to the Governor

For each succeeding award, a medal device (shield) will be attached to the suspension ribbon and service ribbon. These devices shall be: