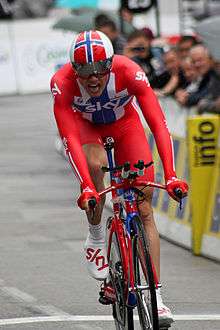 The Norwegian National Time Trial Championships are held annually. They are a cycling race which decides the Norwegian cycling champion in the time trial discipline, across several categories of rider. The event was first held in 1921 and was won by Ole Moen.[1] At the beginning there were often back-to-back wins from many riders. Recent multiple victors have included Edvald Boasson Hagen, Thor Hushovd, Kurt Asle Arvesen and Steffen Kjærgaard. The current champion is Boasson Hagen, who won his eighth title in 2016.