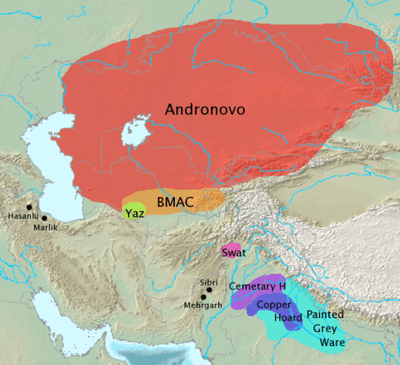 The Ochre Coloured Pottery culture (OCP) is a 2nd millennium BC Bronze Age culture of the Indo-Gangetic Plain (Ganges-Yamuna plain). It is a contemporary of and successor to the Indus Valley Civilization. The OCP marked the last stage of the North Indian Bronze Age and was succeeded by the Iron Age black and red ware culture and the painted gray ware culture. Early specimens of the characteristic ceramics found near Jodhpura, Rajasthan date from the 3rd millennium. (This Jodhpura is located in the district of Jaipur and should not be confused with the city of Jodhpur. Also see Sahibi River.) The culture reached the Gangetic plain in the early 2nd millennium.

The term copper hoards refers to different assemblages of copper-based artefacts in the northern areas of the Indian Subcontinent that are believed to date from the 2nd millennium BC. Few derive from controlled excavations and several different regional groups are identifiable: southern Haryana/northern Rajasthan, the Ganges-Yamuna plain, Chota Nagpur, and Madhya Pradesh, each with their characteristic artefact types. Initially, the copper hoards were known mostly from the Ganges-Yamuna doab and most characterizations dwell on this material.

Characteristic hoard artefacts from southern Haryana/northern Rajasthan include flat axes (celts), harpoons, double axes, and antenna-hilted swords. The doab has a related repertory. Artefacts from the Chota Nagpur area are very different; they seem to resemble ingots and are votive in character.

The raw material may have been derived from a variety of sources in Rajasthan (Khetri), Bihar, West Bengal, Odisha (especially Singhbhum), and Madhya Pradesh (Malanjkhand).

Some scholars regard the OCP culture as late or impoverished Harappan culture, while others see it as an indigenous culture unrelated to the Harappan. V. N. Misra (in S.P. Gupta 1995: 140) regards the OCP as "only a final and impoverished stage of the Late Harappan culture" and designates this phase as "Degenerate Harappan". Together with the Cemetery H culture and the Gandhara Grave culture, some scholars believe the OCP was a factor in the formation of the Vedic civilization.

This article is issued from Wikipedia - version of the 4/23/2016. The text is available under the Creative Commons Attribution/Share Alike but additional terms may apply for the media files.