Arachne is a full-screen Internet suite containing a graphical web browser, email client, and dialer.[1] Originally, Arachne was developed by Michal Polák under his xChaos label, a name he later changed into Arachne Labs. It was written in C and compiled using Borland C++ 3.1.[2] Arachne has since been released under the GPL as Arachne GPL.

Arachne primarily runs on DOS-based operating systems, but includes builds for Linux as well.[3] The Linux version relies on SVGALib and therefore does not require a display server.

Arachne supports many file formats, protocols and standards including video modes from CGA 640×200 in monochrome to VESA 1024×768 in high color mode (65,536 colors). It is designed for systems that do not have any windowing systems installed.[4]

Arachne supports multiple image formats including JPEG, PNG, BMP and animated GIF. It supports a subset of the HTML 4.0 and CSS 1.0 standards, including full support for tables and frames.[5] Supported protocols include FTP, NNTP for USENET forums, POP3, SMTP and Gopher. Arachne includes a full-fledged TCP/IP connection suite, which has support for some dial-up and Ethernet connections. However, Arachne has no support for JavaScript,[6] Java[6] or SSL. Arachne can be expanded with the use of add-ons for such tasks as watching DivX movies, playing MP3 files, IRC chat, RSS and viewing PDF documents.

Arachne supports a limited subset of stylesheets and HTML. Known support as of version 1.93:[5] 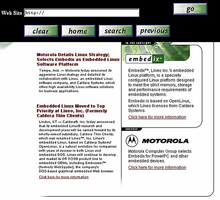 xChaos software licensed the source code of Arachne to Caldera UK in 1997. Caldera UK added Novell's dialer and TCP/IP stack, animated GIFs, printing on a multitude of printers, JavaScript (beta), added an optional on-screen keyboard for mouse and touch panel usage (SoftKeyboards), completely changed the design of the browser (customizable), implemented their own support for frames, and ported it to compile as a 32-bit protected mode extended DOS application (utilizing DPMI using DJGPP, a GNU compiler for DOS),[9] while Arachne is a 16-bit application. This program was sold as DR-WebSpyder; the name was to associate it with DR-DOS, which Caldera owned at the time. Later, when Caldera had transferred DR-DOS to its branch company Caldera Thin Clients, which became Lineo, the browser was renamed Lineo Embrowser.[10]