This article is about a South Korean university and focuses Anam Campus. For its second campus, see Korea University Sejong Campus.

Korea University (KU, Hangul: 고려대학교; Hanja: 高麗大學校; RR: Goryeo Daehakgyo) is a private research university in Seoul, South Korea. Established in 1905, it is one of the nation's oldest and most prominent institutions of higher education. It is considered one of SKY universities, known for being one of the best universities in the country. The student body consists of over 20,000 undergraduate students and over 10,000 graduate students. The university’s academic breadth is broad with its 81 departments in 19 colleges and divisions, and 18 graduate schools. It has over 1,500 full-time faculty members with over 95% of them holding Ph.D. or equivalent qualification in their field.[3] The Korea University Alumni Association consists of more than 280,000 university graduates.

Korea University is a large research institution, notable in South Korean history for being the first educational institution to offer academic programs in Korea in various disciplines, such as law, economics, and journalism.[4][5] It is particularly well known for its College of Law, which is widely considered to be one of the most well-known undergraduate law programs in South Korea.[6] Korea University also has auxiliary educational facilities such as the Institute of Foreign Language Studies, the Institute for Continuing Education, the Institute of International Education, and the Center for Teaching and Learning. There are 115 research institutes, including the Battelle@KU Laboratory, the Ilmin International Relations Institute, and the Center for Information Security Technologies.

Korea University was established on May 5, 1905, as Bosung College by Lee Yong-Ik, Treasurer of the Royal Household. The first College President was Hae-Uoung Shin. As an academic institution of nationalistic origin, it was regarded as a symbol of national pride during the colonial period (1910–1945).

Bosung College had to endure many hardships before Korea University of today came into being. Shortly after Bosung College was established, the "Korea-Japan Protocol" was signed, and Lee Yong-Ik, founder of Bosung College, went into exile to lead the resistance movement against Japan. His exile created financial hardship for the institution. Fortunately, however, the first financial crisis was overcome when Sohn Byong-Hee, a leader of Chundokyo, a nationalist, religious and political movement at the time, took over the management of the institution.

By 1929 the foundation once again faced a serious financial crisis as a result of the worldwide recession. Kim Sung-Soo came to the rescue when he became the president of the College in 1932. At that time, Kim was managing Choong-Ang High School and the Dong-A Ilbo, a daily newspaper.

In June 1932, Kim Sung-Soo took office as President of Bosung College and in 1934 the main building was completed on a 63,000-pyeong area of land located in Anam-dong. Construction of the library started in 1935 in commemoration of the thirtieth anniversary of the founding of Bosung College and was completed two years later. In July of the following year, a large athletic field, one of the largest in Asia in those days, was added to the campus. Kim Sung-Soo, as President, made every effort to develop Bosung College into the first genuine Korean university. Unfortunately, his hope did not become a reality because of Japanese colonial interference. In April 1944, the Japanese colonial government forced Bosung College to change its name and placed it under the thumb of the Japanese authorities.

Following Independence in 1945, the status of Bosung College was elevated to that of a university comprising three colleges, Political Science and Law, Economics and Commerce, and Liberal Arts. Hyun Sang-Yun, the first president, initiated an expansion of the campus by purchasing forest and land. In June 1949, Korea University awarded its first bachelor's degrees and in September of the same year, the graduate school was established. Yu Chin-O, the fourth president, continued to expand Korea University with the establishment of the Division of Science within the College of Liberal Arts, as well as a fourth college, the College of Agriculture.

In June 1961 the present Liberal Arts building (Seokwan) was completed. Various facilities were also completed such as the museum, the agriculture laboratory, the greenhouse, and other buildings for student services. In the same year, an experimental farm of about 1,680,000 pyeong was added to the facilities. In addition, the Science and Engineering Departments were equipped with laboratories and instruments. In December 1963, the Graduate School of Business Administration, the first of its kind in Korea, was established. In October 1965, Yu Chin-O retired after fifteen years of service as the fourth president of Korea University and was succeeded by Professor Lee Chong-Woo as the fifth president. After 1966, Korea University continued to expand with a gradual increase in the number of departments within the College of Science and Engineering and in the College of Agriculture. The Graduate School of Education was also founded. More facilities, including the new annex buildings, the General Education Building (Kyoyangkwan), and the Mass Communication Building (Hongbokwan), were added.

In October 1970, Dr. Kim Sang-Hyup, professor of political science, was appointed as the sixth president, succeeding Lee Chong-Woo who retired in September of that year. In December 1971, a major reorganization of Korea University took place. In accordance with the long-term development plan, all Woosuk University colleges, including Medicine, Liberal Arts and Sciences, Law and Economics, Junior College of Allied Health Sciences, as well as Woosuk University Hospital, were completely integrated into Korea University. In June 1972, the Business Administration Building (Kyoyangkwan) was completed to accommodate the College of Commerce and the Graduate School of Business Administration. In December of the same year, the College of Education was established.

In April 1975, President Kim Sang-Hyup was succeeded by Cha Rak-Hoon who became the seventh president. In December 1976, the College of Commerce was renamed the College of Business Administration. The Graduate School of Food and Agriculture was established in January of the following year. In December 1977, the College of Science and Engineering were separated into the College of Science and the College of Engineering. In addition, the new Central Library, the largest of its kind in South Korea at that time, was opened in March 1978. In July 1983, Medical School and hospital were expanded and reorganized into the Korea University Medical Center, which then included four new hospitals: Haewha, Guro, Yeoju and Ansan. In September 1983, the Science Library opened as the center for science and technology research and was at that time the largest and most modern building on the campus.

In June 2001, Korea University concluded a joint academic program with the University of British Columbia in Canada. The Korea University Lyceum was completed and SK Telecom made a significant contribution in the same month. In July, the Division of International Studies and the School of Journalism and Mass Communication were founded. In October, Korea University obtained ISO9001 authentication in all educational and administrative areas.

In 2005, Korea University celebrated its Centennial Anniversary of Foundation Day, May 5.

Currently, Korea University is composed of sixteen colleges and divisions, as well as eighteen graduate schools and eleven auxiliary facilities, including libraries, museum, and press office for public relations.

Korea University's 56 academic departments and programs are organized into 16 colleges and schools:

Admission to the undergraduate program is very competitive and the admission decisions are based on the applicants' high school transcripts and scores on the South Korean College Scholastic Ability Test. For the freshman class entering in 2016, the overall admission rate was 25%.[7] Admission to Korea University is highly selective as the applicant pool is self-selective, with only the top students from high schools apply for admission.

Korea University is well known for its nationalistic origin in the colonial age, and also for its excellence in law education. In 2003, Korea University Law School students accounted for more than 15% of the nearly 900 people who passed the annual Korean bar examination.[16]

From 2003–2006, Euh Yoon-Dae, the current Chairman of President’s Council on National Branding, Steering Committee of Korea Investment Corporation (KIC), and the former (15th) President of Korea University, drastically changed the image of Korea University, a change symbolized by the adoption of red wine over the traditional rice wine. He started with the strengthening of educational competence by doubling the publication requirements required for faculty promotion and raising the ratio of the classes taught in English to 35% of all courses taught. He also ensured that core liberal arts classes are taught by full-time faculty and required every student except those in the Colleges of Engineering, Law, and Medicine to do a double major. He also showed a peculiar passion for building dormitories for Korea University students at the University of British Columbia in Canada and the University of London in the UK, signing academic exchange agreements with 172 universities overseas, and dispatching 60% of administration staff to the world's top 100 universities for training.[20] Korea University also expanded its international-level facilities. Starting with the Centennial Memorial Samsung Hall, it built many state-of-the-art buildings such as the Hwajung Gymnasium, Tiger Plaza, and Hana Square, and also expanded educational and cultural spaces.

The overall number of international students is expected to be over 1,000 and rising.[21]

Anam campus is divided into four subdivisions. (Science and Engineering, Humanities and Social Sciences, Medicine and Life Sciences, and Health Sciences) It is located in the greater Seoul area that boasts a population of over 20 million. Within a five-minute walk from the campus are an array of restaurants, bars, shops, and even a famous Buddhist temple. It takes about 20 minutes from some buildings of main campus to some buildings of science or medical campus on foot. The College of Health Sciences is 15 to 20 minutes away from the main campus by car.

The following is a list of presidents of Korea University.[22] 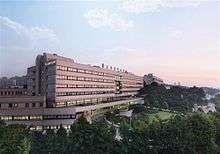 With the opening as Kyoung-sung Women's Medical College in 1938, the university's college of medicine was later renamed and annexed as Seoul Women's Medical College in 1948. Then, in 1967, it was renamed as Woosuk College of Medicine. Finally, the medical school merged with Korea University in 1971, and was officially renamed as Korea University College of Medicine. In 1983, the Korea University Medical Center(KUMC) was formed and its first director was inaugurated. Since then, KUMC has been performing the duties as a university hospital, such as education, research, patient care, and voluntary work in world-disaster areas as well as disadvantaged areas in South Korea. Korea University Medical Center is a comprehensive medical institution that includes three hospitals (Anam, Guro, and Ansan), the College of Medicine, the College of Health & Sciences, three graduate schools, ten laboratories, and several specialized centers. It also has achieved the highest level of health care in the world by acquiring JCI certification, the second medical center in South Korea to do so.[26]

Korea University offers scholarships, fellowships and awards under the auspices of the Korea University Foundation, established in 1905.[27] Close to 245 institutional scholarships, totaling more than 11.5 billion won, are available to Korea University students. Funds have been made available for these programs through the generosity of donors who wish to support the continuing educational efforts of our students. Scholarships are established as either endowed or restricted, in accordance with the wishes of the donor. Scholarships are awarded to students based on criteria such as matriculation status, school and department affiliation, financial need, academic achievement, grade point average and expected graduation date.[28]

The rivalry between Korea University and Yonsei University, the country's top two private schools, is nationally renowned. There is an annual fall sports festival between the two colleges. Since 1956, the annual Korea-Yonsei University Friendship Games has served as the most hotly contested collegiate rivalry in South Korea. Five events: Football, Rugby, Baseball, Basketball, Ice Hockey are held every year.[29]