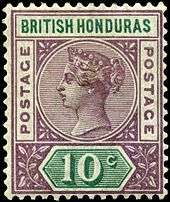 Belize started as the colony of British Honduras, formally established in the 17th century but disputed through the 18th century.

Letters were sent via Jamaica, and are known from 1786. A handstamp reading "Belize" is seen on foreign mail from about 1800, and the first local post office dates from 31 October 1809.[1]

British postage stamps were introduced in 1858, with obliteration "A06" used at Belize. This continued until the colony took over the operation of its own posts on 1 April 1860, and thereafter mail was stampless, handstamps being used to indicate payment of postage.[1] 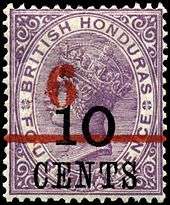 In 1866 the colony introduced its own stamps. The design was a profile of Queen Victoria typical of British stamps of the time, with an oval band reading "BRITISH HONDURAS" and the denomination, which in the first issue consisted of 1d, 6d, and 1sh values. The design continued in use until the Key Plate issue of 1891, with periodic changes of watermark and perforation.

The currency changed from pounds to cents and dollars in 1888, which necessitated the surcharging of the stamp stock with values ranging from 2c to 50c. The Key Plate issue of 1891 ended the need for surcharges; initially consisting of 6 values, 5c and 10c values were added in 1895, and a 25c value in 1898.

1899 saw a modified key plate design inscribed "POSTAGE & REVENUE". Existing stamps were also overprinted "REVENUE" for use as fiscals. The design was retained, but with a new monarchial portrait in 1902, for Edward VII, while George V's accession resulted in a new design issued from 1913 on.

British Honduras' first commemorative stamp was a 2c carmine Peace issue appearing in 1921; the following year the same design was reissued as a 4c stamp in grey, but with the words "Peace" removed from the design.

As with many of the British colonies, British Honduras issued its first pictorial stamps in 1938, a series consisting of 12 stamps with values from 1c to $5. The two-color designs included Mayan figures, agricultural industries, and local scenes.

British Honduras was granted self-government on 1 January 1964 and issued its last issue as British Honduras at the beginning of 1973, celebrating the festivals of Belize.[2]