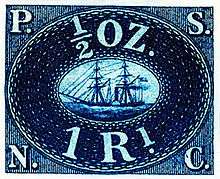 Peru declared independence from Spain in 1821 and decisively defeated colonial forces at the Battle of Ayacucho in 1824.[1]

Peru began using lithographed stamps in 1857 that initially were provided by the Pacific Steam Navigation Company. Most copies of Peru's PSNC stamps in circulation are forgeries. 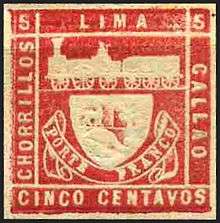 So called Trencito, a commemorative stamp from April 1870,[2] one of the first in the world. Note the embossing at the center of the stamp on the coat of arms and on the train itself. It was produced in Lima on a "Lecoq" machine of French manufacture.

Around 1860 Peru acquired a French-made device (the so-called "Lecoq" press) that was used to print, emboss and cut imperforate stamps from paper strips. The commemorative stamp illustrated to the right was one of the last Peru produced on this rare machine.

For a catalogue used by collectors to classify early Peruvian (imperforate) stamps by their cancellations, see Lamy (and Rinck).[3]