Postage stamps and postal history of Saint Pierre and Miquelon 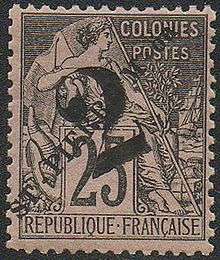 A handstamp is known used from the head post office in Saint-Pierre in 1853.[1] The general colonial issues of France were used from 1859.[1] In 1885 St. Pierre and Miquelon began overprinting stamps of the French Colonies initially with S P M and with ST PIERRE M-on from 1891 to 1892.[2]

From 1909 it issued its own stamps with the islands' name printed in French, either St. Pierre & Miquelon or Saint Pierre et Miquelon. On July 1, 1976, the islands became an official overseas department of France and the islands used the stamps of France from April 1, 1978, until February 3, 1986, when it once again resumed publishing separate issues.[2]

This article is issued from Wikipedia - version of the 11/10/2013. The text is available under the Creative Commons Attribution/Share Alike but additional terms may apply for the media files.