Postage stamps and postal history of the Canal Zone 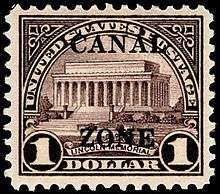 The Panama Canal Zone issued its first postage stamps on 24 June 1904.[1] Initially they were the current stamps of Panama or (less often) the US, overprinted with "CANAL ZONE" in various ways. Philatelists have identified over 100 varieties, some of them quite rare (and counterfeited). The last of these overprints were issued in 1939.

In 1928, the Zone issued a definitive series inscribed "CANAL ZONE POSTAGE" depicting various persons involved in the construction of the canal, as well as a 5 c value showing the Gaillard Cut. A series of 16 stamps in 1939 commemorating the 25th anniversary of the canal's completion showed "before" and "after" views of various points along the canal. Thereafter stamps appeared at an average rate of about two per year, with a commemorative set in some years and no stamps in others. The inscriptions were changed to just "CANAL ZONE" in the 1960s. This paralleled the abandonment of the word "POSTAGE" on many United States stamps, as the United States ceased to issue revenue stamps.

The most famous Canal Zone stamp was the four cent stamp (Scott #157, error stamp #157a), issued on October 12, 1962, for the opening of the Thatcher Ferry Bridge (now called the Bridge of the Americas), the first fixed bridge connecting the two sides of the Canal. One pane of fifty stamps was released without the silver ink used to depict the Bridge. Upon learning of this, Canal Zone postal officials proposed to release a large quantity of intentional errors, to destroy the value of the errors. This would have paralleled what was done at almost the same time for the U.S. four cent stamp showing Dag Hammarskjöld--some stamps had been issued with an inverted background, and to destroy their value, the United States Post Office Department, within a month of the original release, issued millions more. Publicity and a lawsuit by stamp dealer H.E. Harris, who was in possession of some of the errors, and claimed that the new release would effectively destroy their value prevented the release of the Canal Zone intentional errors.

The final years of the Canal Zone saw few stamps issued—those that were issued were mainly for new first-class postal rates (the first-class rates paralleled those of the United States) The last stamp (fifteen cents) of the Zone was issued on October 25, 1978, and depicted one of the towing locomotives and a ship in a lock. Thereafter Panama took over the administration of postal service and, after a brief transition period, Canal Zone stamps became invalid.