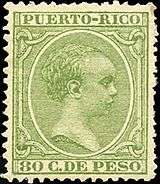 The postal history of Puerto Rico began 160 years ago when Puerto Rico issued postage stamps jointly with Cuba in 1856. This would be followed by postal cards and telegraph stamps, until the United States stamps used today on the island as it is a territory serviced by the United States Postal Service (USPS).

Puerto Rican stamps have, as one would safely assume, featured matters related to Puerto Rico such as its places, events, works, and personalities. 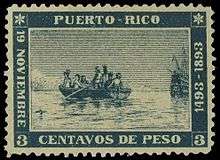 Spanish commemorative postage stamp was issued on the occasion of the four hundredth anniversary of Columbus' arrival in Puerto Rico in 1493, issued in 1893 when the island was still under Spanish rule. It is the only colonial-era Puerto Rican stamp that does not bear the face of the King of Spain.

From 1871 to 1881 a number of different telegraph stamps were issued for Puerto Rico. From 1882 postage stamps were used for telegraph fees which were usually cancelled with a punched hole. From 1886 to 1889 a number of stamps were issued for Puerto Rican municipalities marked TELEGRAFOS as part of the extension of the telegraph network to more towns. It is unclear if these were revenue stamps for a tax on telegrams or to pay the fee for sending a telegraphic message but at least twenty different areas are known to have issued the stamps.[4]

An independent postal service under U.S. authority was established March 15, 1899. But with the Foraker Act of 1900, the postal service of Puerto Rico ceased to be a separate adjunct of the U.S. and was assimilated into the United States postal system.[3] Stamps were originally overprinted with the spelling Anglicized to "PORTO RICO" and later, in 1900, with "PUERTO RICO". Likewise, postal cards and stamped envelopes were also initially overprinted "PORTO RICO" and later "PUERTO RICO". U.S. stamps are now used on the island.