Thornburgh was born in Pittsburgh, Pennsylvania, on July 16, 1932, the son of Alice (Sanborn) and Charles Garland Thornburgh, an engineer.[1] Thornburgh attended Mercersburg Academy then Yale College from which he obtained an engineering degree in 1954. Subsequently he received a law degree from the University of Pittsburgh School of Law in 1957, where he served as an editor of the Law Review. He subsequently has been awarded honorary degrees from 32 other colleges and universities. He joined the international law firm K&L Gates in 1959.[2]

Thornburgh married Ginny Hooton, and they had three sons together (John, David and Peter). Ginny Hooton was killed in an automobile accident in 1960 which left Peter, the youngest of their three sons, with physical and intellectual disability.[3] In 1963 Thornburgh was remarried to Ginny Judson, with whom they had another son, Bill, in 1966. Ginny (Judson) Thornburgh was a former schoolteacher from New York, who holds degrees from Wheaton College in Norton, Massachusetts and the Harvard Graduate School of Education. A lifelong advocate of people with disabilities, she served as Director of the Interfaith Initiative of the American Association of People with Disabilities, based in Washington, D.C., and has co-authored and edited "That All May Worship," an award winning handbook for religious congregations working to include people with all types of disabilities. She received the Hubert H. Humphrey Civil Rights Award from the Leadership Conference on Civil Rights in April 2005.

The Thornburghs have four sons, six grandchildren, and three great granddaughters and one great grandson. As parents of a son with disability, they have taken a special interest in the needs of persons with disabilities and, with their son Peter, were named "Family of the Year." Both Ginny and Dick Thornburgh were featured speakers at the Vatican Conference on Disabilities held in Rome in November, 1992, and were co-recipients in 2003 of the Henry B. Betts Award, the proceeds from which were used to establish the Thornburgh Family Lecture Series on Disability Law and Policy at the University of Pittsburgh. As Attorney General of the United States, Thornburgh played a leading role in the enactment of the Americans with Disabilities Act. In 2002 Thornburgh received the Wiley E. Branton Award of The Washington Lawyers' Committee for Civil Rights and Urban Affairs in recognition of his "commitment to the civil rights of people with disabilities."

Following an unsuccessful bid for the U.S. House of Representatives against William S. Moorhead in 1966, Thornburgh served as an elected delegate to the 1967–1968 Pennsylvania Constitutional Convention where he spearheaded efforts at judicial and local government reform. In 1969 President of the United States Richard Nixon appointed Thornburgh as the U.S. Attorney for the Western District of Pennsylvania, where he earned a reputation as being tough on organized crime. In 1975, President Gerald Ford tapped him to serve as the Assistant Attorney General for the Justice Department's Criminal Division. After two years at that post, Thornburgh returned to law practice in Pittsburgh and initiated a campaign for governor.

In 1978, Thornburgh launched a campaign for governor of Pennsylvania. He won the primary over six other contenders, including Arlen Specter, who had become well known as a former Democrat who switched parties and was elected the Philadelphia County district attorney in 1965 and the more conservative David W. Marston, a former U.S. attorney in Philadelphia, who was controversially dismissed in 1978 by the Jimmy Carter administration after Marston launched prosecution of two Democratic congressmen and two Democratic state legislators.

Despite a Democratic majority in the commonwealth, he and running mate Bill Scranton (whose father served as governor in the 1960s) defeated Pittsburgh mayor Pete Flaherty and his running mate, educator Bob Casey (who bears no relation to Robert P. Casey, the 42nd Governor of Pennsylvania). The victory was attributed in part to Thornburgh's campaign promises to crack down on government corruption, at a time when more than 60 persons in the Shapp administration were indicted on criminal charges. Thornburgh and Scranton were reelected in 1982. However, Scranton failed to win the governorship on his own in 1986.

Following the unprecedented 1979 Three Mile Island nuclear power plant accident near Harrisburg Pennsylvania, Governor Thornburgh was described by observers as "one of the few authentic heroes of that episode as a calm voice against panic." He oversaw emergency response efforts to the partial meltdown at the nuclear power plant and also had a major role in coordinating funding for cleanup efforts.[4] 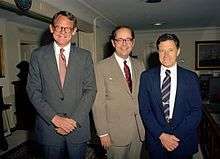 During his two terms as governor, Thornburgh balanced the commonwealth's budgets for eight successive years, reduced both personal and business tax rates, cut the state's record-high indebtedness and left a surplus of $350 million. He was widely recognized for economic development and the establishment of the Ben Franklin Partnership, and for implementing welfare reform programs. Pennsylvania's unemployment rate, among the ten highest in the nation when he was elected, was among the ten lowest when he left office as 50,000 new businesses and 500,000 new private sector jobs were created during his tenure. However, he was also known for scandals which involved charging the commonwealth for his wife's travel expenses as well as State Police escorts for his children.

Thornburgh was also responsible for consolidating all of Pennsylvania's state-owned colleges and universities into the Pennsylvania State System of Higher Education. He also created the Governor's Schools, which were summer programs for talented and gifted high school students.

Thornburgh was the first Republican to serve two successive terms as governor of the commonwealth. He left office in 1987 with a 72 percent approval rating and recognition by fellow governors in a 1986 "Newsweek" poll as one of the most effective big-state governors in the nation.

After leaving office in 1987, Thornburgh served as director of the Institute of Politics at the John F. Kennedy School of Government at Harvard University. 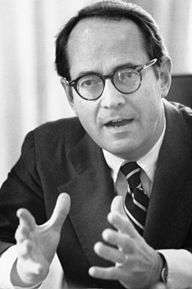 He mounted a vigorous attack on white-collar crime as the Department of Justice obtained a record number of convictions of savings and loan crisis and other securities officials, defense contractors and corrupt public officials. Thornburgh established strong ties with law enforcement agencies around the world to help combat drug trafficking, money laundering, terrorism and international white-collar crime. During his tenure as attorney general, he twice argued and won cases before the United States Supreme Court. The "Legal Times" noted that Thornburgh as Attorney General "built a reputation as one of the most effective champions that prosecutors have ever had." As honorary Special Agent of the Federal Bureau of Investigation, he chaired a panel of the National Academy of Public Administration examining the FBI's post-9/11 transformation process and was a member of the FBI Director's Advisory Board. He oversaw the major environmental litigation that resulted from the Exxon Valdez oil spill in 1989.

All told, Thornburgh served in the Justice Department under five Presidents, beginning in Pittsburgh when serving as United States Attorney, from 1969 to 1975.

He resigned as attorney general in 1991 to run for the U.S. Senate seat left vacant when Senator John Heinz was killed in a plane crash; major-party candidates were chosen by the party committees because it was too late for a primary. There was widespread speculation that Thornburgh had struck a deal with Democratic Pennsylvania Congressman and House Majority Whip William H. Gray. Gray had been the subject of an investigation into alleged campaign finance irregularities and a grand jury investigation into his church's financial dealings. It was reported that Gray would not run in the special election and in return Thornburgh would drop the investigation into him.[5][6][7][8][9] Gray did not run in the election and in fact resigned from Congress two months prior to it in order to take a job as President and CEO of the United Negro College Fund. Thornburgh was widely expected to win the seat; however, he was defeated in an upset by Democrat Harris Wofford, who had been the interim appointee to that seat. In 1993, Thornburgh's campaign committee was sued in federal court by Karl Rove, who won the case and collected $180,000 from the Thornburgh committee.

Thornburgh served a one-year appointment as Under-Secretary General at the United Nations (1992–1993) at the personal request of President Bush. This UN top management position put Thornburgh in charge of personnel, budget and finance matters. His Report to the Secretary-General of the United Nations was widely praised.[10] It pertained to reform, restructuring and streamlining efforts designed to make the United Nations peacekeeping, humanitarian and development programs more efficient and cost-effective. 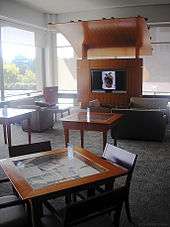 After his twenty-five years in public service, Thornburgh re-entered private legal practice returning to K&L Gates, the law firm he originally joined in 1959. In 2002, the U.S. Bankruptcy Court in the Southern District of New York appointed him as an examiner in the WorldCom bankruptcy proceedings. His report to the court included damning criticism of Arthur Andersen, WorldCom's accounting firm, and banking giant Citigroup. The report concluded that the two companies aided WorldCom executives in committing fraud.

In 2004, Thornburgh was asked by CBS to undertake an independent investigation of the so-called Rathergate controversy with former Associated Press CEO, Lou Boccardi. Following the investigation and report, Dan Rather relinquished his anchor position on the "CBS Evening News." Then in October 2005 Thornburgh was asked to represent controversial Democratic Pennsylvania politician and nationally renowned forensic pathologist Dr. Cyril Wecht, who was then serving as Coroner of Allegheny County. The federal grand jury in Pittsburgh had returned an eighty-four-count felony indictment against Doctor Wecht. Ultimately all charges were dismissed after three-a-half years, on May 14, 2009.

Thornburgh also served as a consultant to the United Nations, the World Bank and the Inter-American Development Bank on efforts to battle fraud and corruption.

Thornburgh appeared in an interview on an episode of Da Ali G Show entitled "The Law" in which Ali G asks several questions about legal issues. Thornburgh appears extremely amiable throughout the interview and never talks condescendingly towards Ali (as is often the case with Ali's guests).

Thornburgh, a long-time supporter of self-determination, authored "The Future of Puerto Rico: A Time to Decide" in 2007, in which he calls for immediate change in the island's territorial/commonwealth status. He describes it as a vestige of colonialism. He concedes, however, that change is difficult because equal segments of Puerto Ricans desire statehood or continuation of the status quo. The book is based in part on ongoing research he has done regarding Puerto Rico's vexing political status problem since he testified as attorney general on behalf of the first Bush administration on the issue before the Energy and Natural Resources Committee of the United States Senate in 1991 and for an amicus curiae brief he filed in a Puerto Rico voting rights case before the U.S. Court of Appeals for the First Circuit.[11]

Throughout his career, Thornburgh has traveled widely, visiting over 40 countries and meeting with leaders from Canada, Mexico, Europe, Africa, the Middle East, Russia, Ukraine, Japan, China, Taiwan, Korea, India, Cambodia, Australia, New Zealand and Central and South America. He served as an observer to the Russian Federation's first legislative (1993) and presidential (1996) elections. He is a former member of the Council on Foreign Relations.

Washington, DC (PR News/Wire), December 13, 2011, announced a special recognition appearing in the October, 2008 issue of The Washington Post selecting Thornburgh for one of "Washington DC's Top Lawyers." Dick Thornburgh commented on the recognition: "This is quite an honor for me. The fact that The Washington Post included me...signals that my constant effort to deliver excellent work has paid off. It is gratifying to be recognized in this way."

The K&L Gates site includes nearly 50 published articles and white papers by Dick Thornburgh which serve as a documentation of his career between 2001 and 2011.