Legend has it that the borough's name is derived from early settlers who bought the land from the Native Americans in exchange for some rum. But as far back as 1663, long before the area was officially named Rumson, Native Americans called it "Navarumsunk". Over the years it has been shortened to "Rumson",[22] though sources also talk of a Chief Alumson as a source of the name.[23] Other names Rumson has been known by include Black Point, Port Washington, and Oceanic.[24]

Rumson was purchased by English settlers in pieces. The first purchase is dated January 25, 1665, and it included parts of Middletown. The rest of the area was purchased later that year.

Rumson is known for its many sprawling turn-of-the-century estates located along the shores of the Navesink and Shrewsbury rivers and along historic Rumson Road, which serves as one of Rumson's main thoroughfares. Rumson's many old estates were built as summer homes for wealthy New York bankers and industrialists. The oldest of Rumson's homes was the Tredwell House, named after a family that summered here for almost 100 years. The oldest part of the house being from 1670 once occupied 700 acres (2.8 km2); it was the second oldest building in Monmouth County as of June 2006, when it was destroyed by fire.[25]

In the 19th century Rumson's summer residents enjoyed many activities, such as swimming and boating in the adjacent Navesink River and the Atlantic Ocean, or taking a wagon ride. In winter, residents used the river for ice boating. 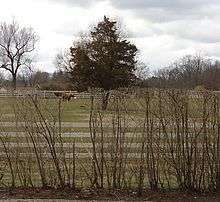 Cows on a property in Rumson. 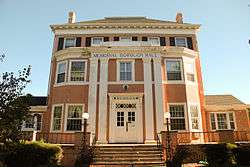 Rumson is governed under the Borough form of New Jersey municipal government. The governing body consists of a Mayor and a Borough Council comprising six council members, with all positions elected at-large on a partisan basis as part of the November general election. A Mayor is elected directly by the voters to a four-year term of office. The Borough Council consists of six members elected to serve three-year terms on a staggered basis, with two seats coming up for election each year in a three-year cycle.[3] The Borough form of government used by Rumson, the most common system used in the state, is a "weak mayor / strong council" government in which council members act as the legislative body with the mayor presiding at meetings and voting only in the event of a tie. The mayor can veto ordinances subject to an override by a two-thirds majority vote of the council. The mayor makes committee and liaison assignments for council members, and most appointments are made by the mayor with the advice and consent of the council.[39][40]

Councilmember Frank E. Shanley submitted a letter of resignation that took effect as of December 31, 2014, and was replaced in January 2015 by John J. Conklin, III, who was selected by the Borough Council from a list of three candidates nominated by the Republican municipal committee.[46][47]

Monmouth County is governed by a Board of Chosen Freeholders consisting of five members who are elected at-large to serve three year terms of office on a staggered basis, with either one or two seats up for election each year as part of the November general election. At an annual reorganization meeting held in the beginning of January, the board selects one of its members to serve as Director and another as Deputy Director.[59] As of 2014, Monmouth County's Freeholders are Freeholder Director Lillian G. Burry (R, Colts Neck Township; term ends December 31, 2014),[60] Freeholder Deputy Director Gary J. Rich, Sr. (R, Spring Lake; 2014),[61] Thomas A. Arnone (R, Neptune City; 2016),[62] John P. Curley (R, Middletown Township; 2015)[63] and Serena DiMaso (R, Holmdel Township; 2016).[64][65] Constitutional officers elected on a countywide basis are County Clerk M. Claire French (Wall Township),[66] Sheriff Shaun Golden (Farmingdale)[67] and Surrogate Rosemarie D. Peters (Middletown Township).[68]

The Rumson School District serves public school students in pre-Kindergarten through eighth grade. As of the 2011-12 school year, the district's two schools had an enrollment of 982 students and 75.5 classroom teachers (on an FTE basis), for a student–teacher ratio of 13.01:1.[77] Schools in the district (with 2010-11 enrollment data from the National Center for Education Statistics[78]) are Deane-Porter Elementary School[79] (PreK-3, 417 students) and Forrestdale Middle School[80] (4-8, 565 students).[81]

Public school students in ninth through twelfth grades attend Rumson-Fair Haven Regional High School, a regional, four-year comprehensive public high school serving students from both Fair Haven and Rumson, where the school is located.[82] As of the 2013-14 school year, the high school had an enrollment of 918 students and 83.3 classroom teachers (on an FTE basis), for a student–teacher ratio of 11.0:1.[83]

Private schools in Rumson include Holy Cross School for grades K-8, which operates under the auspices of the Roman Catholic Diocese of Trenton.[84][85] In 2015, Holy Cross School was one of 15 schools in New Jersey, and one of six private schools, recognized as a National Blue Ribbon School in the exemplary high performing category by the United States Department of Education.[86][87]

Founded in 1926 and developed under the principles of its organizer B. Lord Buckley, Rumson Country Day School serves students in preschool through eighth grade and was recognized in 1999 by the National Blue Ribbon Schools Program.[88] 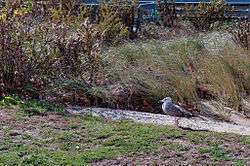 Wildlife on the Rumson shore.

Transportation to New York is available via NJ Transit's train service from either the Little Silver or Red Bank stations on the North Jersey Coast Line.[90]

Many of Rumson's residents work in the financial services industry and commute to Wall Street on the high-speed SeaStreak ferry that leaves from nearby Atlantic Highlands. The ferry ride is 40 minutes to the foot of Wall Street or an hour to Midtown Manhattan.[91]

Driveway of a mansion in Rumson.

People who were born in, residents of, or otherwise closely associated with Rumson include: