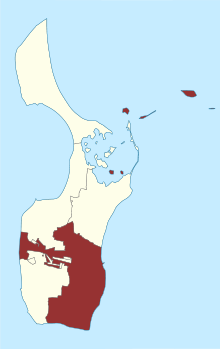 Tranebjerg is a parish and small town, situated at the centre of the South Island of Samsø in Denmark. It is the largest town on Samsø, with a population of 836 (1 January 2014) and also the municipal seat of the small Samsø Municipality.[1]

Tranebjerg is an old town, with a big village church from the 14th century and was once home to Brattingsborg Castle, a royal castle that burned down in the year 1289. Of the more modern facilities the town is home to a tourist office and an Ecomuseum. At the Ecomuseum, restored old buildings like an active oldfashioned smallholding, a skipper-farmhouse, a blacksmith and a grain mill amongst others, exposes the connection between Samsø's landscape, culture and inhabitants through the ages which includes an exhibition of the islands Stone Age past, traced to about 9.000 BC.