This is a Chinese name; the family name is Sham.

He is the younger brother of footballer Sham Kwok Fai.

Both Sham Kwok Keung and his older brother Sham Kwok Fai were youth products of Happy Valley AA. He was named the Best Young Player in the 2003-04 Hong Kong First Division League season. But since then his progress has been hampered by injuries. At the end of the 2005–06 season he underwent surgery for his knee and spent 3 months recuperating. He regained a starting position but then twisted his ankle and broke half of his tendon, ending his season. The injuries caused him to change his shirt number from 12 to 13.[2]

Sham Kwok Keung joined Shatin SA in the 2009-10 Hong Kong First Division League season, after Happy Valley was relegated. He scored a goal in the 7th minute against Tai Po FC to help the team win its first game by 4–1 on 24 October 2009.[3]

Shatin SA was relegated at the end of the season. Sham Kwok Keung thus moved to Citizen to replace Xu Deshuai who moved to South China AA.[4]

Sham Kwok Keung scored the second goal with a header, from brother Sham Kwok Fai's cross, for Citizen and helped the team overcome a 0–3 deficit in the 2010-11 Hong Kong Senior Challenge Shield final against South China AA, to eventually tie the match 3–3. Citizen went on to win the penalty shoot-out by 4–2 to win the trophy and qualified for the 2012 AFC Cup.[5]

On 17 November 2011, he was diagnosed with a broken rib, sustained in the match in October against Tuen Mun SA when he was hit in the chest, and had to rest for 3 weeks. He did not therefore play against league champions Kitchee SC on 20 November 2011.[9] On 6 January 2012, Sham Kwok Keung scored a header in the 85th minute against South China to make it 3–2 to Citizen, but later he was sent off for two bookable offences. The matched ended 3–3.[10] 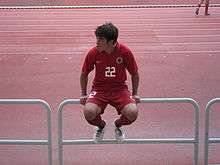 Sham Kwok Keung played in the 2006 Asian Games for Hong Kong. He scored a goal in the 8th minute against Iran national under-23 football team, but Hong Kong eventually lost the match 1–2.[11]

Sham Kwok Keung was a member of the Hong Kong national under-23 football team for the 2008 Beijing Olympics Asian qualifiers. He scored a goal with a bicycle kick and provided an assist to Chan Siu Ki to score and win the game 3–0 in the qualifying match away to Bangladesh.[12] Hong Kong lost the home leg 0–1 but still proceeded to the next round.[13]

In a 2007 AFC Asian Cup qualifying game, Sham Kwok Keung appeared as a substitute for Hong Kong against Uzbekistan and scored two goals at the 66th and 87th minute, to help Hong Kong gain a point from the game, thus keeping Hong Kong's hopes alive for qualification. Sham Kwok Keung received great praise from coach Lai Sun Cheung after the match for his contribution.[14] On 2 October 2011, Sham Kwok Keung scored two goals for Hong Kong in the 2011 Long Teng Cup against Macau to help Hong Kong win the match by 5–1.[15] He was then sent off after two bookable offences in the last match against Chinese Taipei, but Hong Kong still won 6–0.[16]

In the 2011 Guangdong–Hong Kong Cup, Guangdong won its home leg 3–1. Sham Kwok Keung scored the equalising goal in the return leg and Hong Kong drew the match 1–1, but Hong Kong lost the tie 4–2.[17]