Tottori Prefecture (鳥取県, Tottori-ken) is a prefecture of Japan located in the Chūgoku region.[1] The capital is the city of Tottori.[2] It is the least populous prefecture in Japan.

The word "Tottori" in Japanese is formed from two kanji characters. The first, 鳥, means "bird" and the second, 取 means "to get". Early residents in the area made their living catching the region's plentiful waterfowl. The name first appears in the Nihon shoki in the 23rd year of the Emperor Suiko when Yukuha Tana, an elder from the Izumo, visits the emperor. The imperial Prince Homatsu-wake was unable to speak, despite being 30 years of age.

"Yukuha Tana presented the swan to the emperor. Homatsu-wake no Mikoto played with this swan and at least learned to speak. Therefore, Yukaha Tana was liberally rewarded, and was granted the title of Tottori no Miyakko." (Aston, translation)[3]

Tottori Prefecture was settled very early in the prehistoric period of Japan, as evidenced by remains from the Jōmon period (14,000 – 300 BC).[4] The prefecture has the remains of the largest known Yayoi period (300 BC – 250 AD) settlement in Japan, the Mukibanda Yayoi remains, located in the low foothills of Mount Daisen[5] in the cities of Daisen and Yonago.[6] Numerous kofun tumuli from the Kofun period (250 – 538) are located across the prefecture.[7] In 645, under the Taika reforms, the area in present-day Tottori Prefecture became two provinces, Hōki and Inaba.[8]

During the Genpei War (1180–1185) between the Taira and Minamoto clans in the late-Heian period, Tottori became a base for anti-Taira forces, specifically at two temples, Daisen-ji and Sanbutsu-ji. By the beginning of the Kamakura period (1185–1333) shōen estates were established to directly support the Imperial court and various temples. Successive clans controlled the region during the Sengoku period (15th to 17th century), most notably the Yamana clan, but after the Battle of Sekigahara in 1600 the region was pacified. The Tokugawa shogunate installed the Ikeda clan at Tottori Castle. The clan retained control of the area until throughout the Edo period (1603–1868) and the resources of the area financially and materially supported the shogunate.[9]

The two provinces remained in place until the Meiji Restoration in 1868, and the boundaries of Tottori Prefecture were established in 1888.[4] After the occupation of Korea and Taiwan in the 20th century, and the establishment of the Manchukuo puppet state in 1932, Tottori's harbors on the Japan Sea served as an active transit point for goods between Japan and the colonial areas. Before the end of World War II the prefecture was hit by a massive magnitude 7.2 earthquake, the 1943 Tottori earthquake, which destroyed 80% of the city of Tottori, and greatly damaged the surrounding area. In the postwar period land reform was carried out in the prefecture, resulting in a great increase of agricultural production.[9] 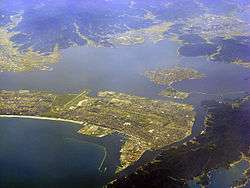 Tottori is home to the Tottori Sand Dunes, Japan's only large dune system. As of 1 April 2012, 14% of the total land area of the prefecture was designated as Natural Parks, namely the Daisen-Oki and Sanin Kaigan National Parks; Hiba-Dōgo-Taishaku and Hyōnosen-Ushiroyama-Nagisan Quasi-National Parks; and Misasa-Tōgōko, Nishi Inaba, and Okuhino Prefectural Natural Parks.[10]

Tottori is the least populated prefecture in Japan.

Tottori Prefecture is heavily agricultural and its products are shipped to the major cities of Japan. Some of the famous products are the nashi pear, nagaimo yam, Japanese scallion, negi, and watermelon. The prefecture is also a major producer of rice.

Historically, the region had extensive linguistic diversity. While the standard Tokyo dialect of the Japanese language is now used in Tottori Prefecture, several other dialects are also used. Many of them are grouped with Western Japanese, and include the Chugoku and Umpaku dialects.[11]

The sports teams listed below are based in Tottori.

The symbol is derived from the first mora in Japanese for "と" combined with the picture of a flying bird, and symbolizes peace, liberty, and the advancement of the Tottori prefecture. It was enacted in 1968 to celebrate the 100th year from the first year of the Meiji Era.