The Smoky Hills are an upland region of hills in the central Great Plains of North America. They are located in the Midwestern United States, encompassing north-central Kansas and a small portion of south-central Nebraska.

The hills are a dissected plain covered by tallgrass and mixed-grass prairie. The Smoky Hills were formed by sedimentary deposits during the Cretaceous period and consist of chalk, limestone, and sandstone rock outcroppings. 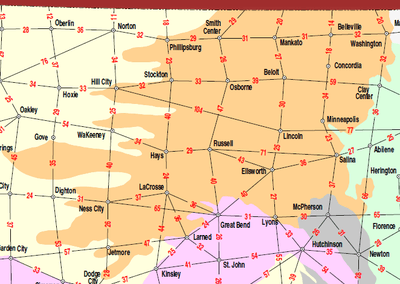 The Smoky Hills region is part of the Plains Border subregion of the Great Plains.[1] It occupies nearly all of north-central Kansas, bordered on the west by the High Plains, on the northeast by the Dissected Till Plains, on the east by the Flint Hills, and on the south by the Arkansas River lowlands.[2] The region extends into south-central Nebraska, bordered on the north by the Rainwater Basin.[3]

It consists of three belts of hills, all running southwest to northeast, which correspond to the underlying geological formations (see geology section). The Smoky Hills proper comprise the easternmost belt; the two western belts are known as the Blue Hills. The hills of the westernmost belt are also known as the Chalk Bluffs.[4] The Blue Hills escarpment forms the boundary with the High Plains to the west.[5]

The Republican River, Saline River, Solomon River, and Smoky Hill River all flow eastward through the Smoky Hills from their sources in the High Plains. Beginning in the 1940s, the U.S. Army Corps of Engineers and the U.S. Bureau of Reclamation dammed these rivers at points in the Smoky Hills for flood control and irrigation purposes, creating several reservoirs.[6][7] These include Cedar Bluff Reservoir, Kanopolis Lake, Kirwin Reservoir, Waconda Lake, Webster Reservoir, and Wilson Lake.

The region is divided into three regions based on the underlying rock outcroppings: The Dakota Formation (sandstone), the Greenhorn Limestone and the Niobrara Chalk.[9]

The Dakota Formation forms the eastern region. This area includes the Smoky Hill buttes, which are capped by sandstone and provide a sharp contrast with the surrounding plains. One of the most notable buttes is Coronado Heights in Saline County.[9] There are concretions at Rock City in Ottawa County and Mushroom Rock State Park in Ellsworth County. These are cemented by calcium carbonate.[10]

The Greenhorn Limestone region in the central region is made up of thin—usually less than 6 inches (15 cm)—chalky limestone beds alternating with thicker beds of grayish shale. This area is known as post rock country due to the practice of early settlers using limestone for buildings and fenceposts since trees were scarce.[9]

The chalk beds of the Niobrara Chalk are exposed in bluffs of the western Solomon, Saline, and Smoky Hill Rivers and in an irregular belt in the west. This area includes such Kansas landmarks as Castle Rock and Monument Rocks in Gove County. The chalk beds are known for the late 19th and early 20th century excavations of exceptionally well-preserved fossils of marine reptiles such as the plesiosaurs and mosasaurs found in the uppermost member of the Niobrara Chalk, the Smoky Hill Chalk.[9]