Sherman County (standard abbreviation: SH) is a county located in the U.S. state of Kansas. As of the 2010 census, the county population was 6,010.[2] Its county seat is Goodland.[3] Sherman County was created by the Legislature of 1873, and named after General William Tecumseh Sherman. [4]

For many millennia, the Great Plains of North America was inhabited by nomadic Native Americans. From the 16th century to 18th century, the Kingdom of France claimed ownership of large parts of North America. In 1762, after the French and Indian War, France secretly ceded New France to Spain, per the Treaty of Fontainebleau.

Sherman County is one of only four Kansas counties to observe Mountain Standard Time. Since Sherman County is part of the Wichita media market and the local broadcast stations are repeat signals of Wichita affiliates, prime-time programming in the county is aired from 6 to 9 p.m. local time, rather than 7 to 10 p.m. as is normal in the Central and Mountain time zones. However, cable providers carry the ABC and NBC affiliates from both Wichita and Denver, affording viewers the opportunity to view programs on those networks at the normal prime-time hours. 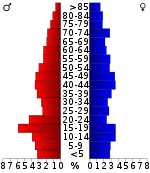 Sherman County was a prohibition, or "dry", county until the Kansas Constitution was amended in 1986 and voters approved the sale of alcoholic liquor by the individual drink with a 30% food sales requirement.[12] 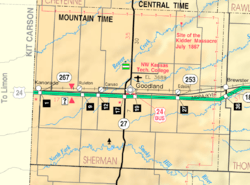 Sherman County is divided into thirteen townships. The city of Goodland is considered governmentally independent and is excluded from the census figures for the townships. Geographically, Goodland is located at the juncture of Voltaire, Itasca, and Logan Townships. In the following table, the population center is the largest city (or cities) included in that township's population total, if it is of a significant size.