Not to be confused with Smith Center, Kansas.

Smith County (standard abbreviation: SM) is a county located in the U.S. state of Kansas. As of the 2010 census, the population was 3,853.[1] Its county seat is Smith Center.[2] The county is named in memory of Maj. J. Nelson Smith, who was part of the 2nd Colorado Cavalry, killed in action at the Battle of Westport on October 21, 1864.

The geographic center of the contiguous United States is located within the county, near Lebanon.[3]

For many millennia, the Great Plains of North America was inhabited by nomadic Native Americans. From the 16th century to 18th century, the Kingdom of France claimed ownership of large parts of North America. In 1762, after the French and Indian War, France secretly ceded New France to Spain, per the Treaty of Fontainebleau.

In 1854, the Kansas Territory was organized, then in 1861 Kansas became the 34th U.S. state. In 1872, Smith County was established. The first homestead in Smith County was in 1871 and there were 3,800 inhabitants by 1875. The county grew to 15,000 people by 1889. Corn was the main crop at first but drought and grasshopper plagues severely hurt the crops. When hardy Winter wheat was introduced to Kansas by Russian settlers, it eventually became the predominant crop in Smith County. The population of the county has slowly declined since 1900 due in large part because of advanced farming techniques that require less human labor.

Dr. Brewster Higley wrote the song "Home on the Range" in 1871 in a cabin 8 miles north of Athol. It later became the Kansas State song.

The Solomon River runs through the southern part of the county and provides a flat basin and water for irrigated crops. 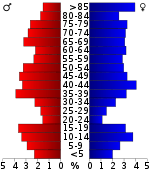 Following amendment to the Kansas Constitution in 1986, the county remained a prohibition, or "dry", county until 1992, when voters approved the sale of alcoholic liquor by the individual drink with a 30% food sales requirement.[12] 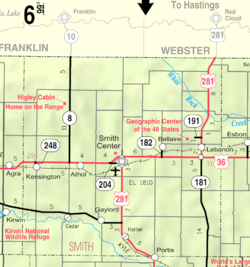 Smith County is divided into twenty-five townships. None of the cities within the county are considered governmentally independent, and all figures for the townships include those of the cities. In the following table, the population center is the largest city (or cities) included in that township's population total, if it is of a significant size.