Talakona is a resort with waterfalls, dense forests and wildlife. The area was declared a biosphere reserve in 1989 due to the presence of rich variety of flora and fauna.

Talakona means head hill in Telugu (tala - head and kona - hill). However, Thalakona allegorically means “the head of the Seshachalam hills” as these mountains are believed to be the starting point of the Tirumala mountain ranges.[2]

Andhra Pradesh RTC buses (APSRTC) ply towards this route. Catch bus going towards pileru or madanapalle from Tirupati bus stand, get down at Bhakarapet. Then from here private share autos can be hired that which goes towards Nerabailu village.Entry restricted after 4:30p.m., Only 2 buses goes from Bhakarapet bus stand so have to highly depend on own vehicles or auto rickshaws. 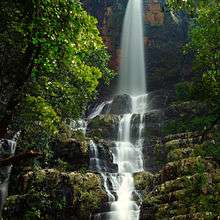 The waters of Talakona are enriched with herbs and people believe that it has healing properties. (Pictures of Butterflies & Wild Flowers of Talakona forest). A long and treacherous trekking route leads to the top of the hill, which can be reached by multiple paths. Talakona hills geographically is considered a part of the Eastern Ghats.

There is a beautiful waterfall falling deep into the valley from a cliff on the upper reaches. According to the local residents, it is said that the origin of water is difficult to be traced out since an underground stream surfaces here.

There used to be a 240 meter long canopy rope walk, about 35 to 40 feet in height . There are number of trek routes in different categories of difficulty, giving an option for the visitor to choose their route.

In the area there is an ancient Siva temple which is flooded with devotees during Sivarathri festival. There are also deep caves scattered over the mountains where it is believed that sages meditate eternally. A stream flows near the canopy walk area where a bathing ghat is under construction.

Accommodation is also available in this dense forest, it gives immense pleasure for visitors to spend time during nights. Accommodation in Talakona guest houses can be booked in seshachalavanadarshani.com official website for Talakona and other tourist places like Mamandur, Pulicat-lake, Thumbalabailu etc.

The Temple at Talakona water falls is a Siva Temple known as "SIDDHESWARA SWAMY TEMPLE". The deity is called as 'Siddheswara'. As per the Local people, the temple was built some 140 years ago.The SIVA LINGA in the temple was brought from the ruined temple of Rayavaripalli, a village in Pulicherla Mandal, On olden days there was a custom that if any new temple is constructed, instead of make a new Siva Linga, can install old one which lies without Pooja in ruined Temples. Based on this custom the SIVA LINGA was brought from Rayavaripalli ruined temple. The relics of the ruined temple can be seen today also in the agricultural fields of Rayavaripalli. That field is called as " Lingaakaaram kaada kayya", till today, which means a piece of agricultural field near Siva Lingam.

The Rayavaripalii temple was destroyed and taken away the wealth of the temple by Hyder Ali troops on the en route to Arcot in mid 18th century.