The Biligirirangana Hills, (Kannada: ಬಿಳಿಗಿರಿರಂಗನ ಬೆಟ್ಟ) commonly called B R Hills, is a hill range situated in south-eastern Karnataka, at its border with Tamil Nadu (Erode District) in South India. The area is called Biligiriranganatha Swamy Temple Wildlife Sanctuary or simply BRT Wildlife Sanctuary. It is a protected reserve under the Wildlife Protection Act of 1972. Being at the confluence of the Western Ghats and the Eastern Ghats, the sanctuary is home to eco-systems that are unique to both the mountain ranges. The site was declared a tiger reserve in January 2011 by the Karnataka government, a few months after approval from India's National Tiger Conservation Authority.[1]

The hills are located at the easternmost edge of the Western Ghats and support diverse flora and fauna in view of the various habitat types supported. A wildlife sanctuary of 322.4 square kilometres (124.5 sq mi) was created around the temple on 27 June 1974, and enlarged to 539.52 square kilometres (208.31 sq mi) on 14 January 1987. The sanctuary derives its name Biligiri (Kannada for white rock) from the white rock face that constitutes the major hill crowned with the temple of Lord Rangaswamy or from the white mist and the silver clouds that cover these hills for a greater part of the year. The hills are in the Yelandur, Kollegal and Chamarajanagar talukas of Chamarajanagar District of Karnataka. They are contiguous with hills in Sathyamangalam Wildlife Sanctuary in Erode District of Tamil Nadu to the south. By road, they are about 90 kilometres (56 mi) from Mysore and 160 kilometres (99 mi) from Bangalore. The road leading to the village on top of the hills may be approached either from Yelandur or Chamarajanagar.

The temple of Ranganatha is situated at the edge of a bare cliff overlooking the northern parts of the sanctuary. The bare rock-cliff looks white in colour, giving the hill its name (Biligiri in Kannada means white hill). The deity is often referred to as Biligiriranga and is depicted in a unique standing position. The Ranganatha deity at this temple is possibly the only standing form of Ranganatha, attributed to Tipu Sultan's rechristening of a previous Venkatesha temple, when he visited these hills during a hunting expedition. This may have happened to attract patronage of the Sultan as he was supposed be a patron of Ranganatha. Other deities in the temple include those of Ranganayaki and several Alvars. An annual car festival is held during Vaishakha in the month of April. Every two years, the local Soliga tribe present a large pair of slippers measuring 1-foot (0.30 m) and 9 inches, to Ranganatha.[10].

A large Michelia champaka known as "Doddasampige"(from Kannada for large Champak tree: ದೊಡ್ದಸಂಪಿಗೆ) is one of several sacred groves of India of the Soliga people. The tree is believed to be several hundred years old and its large canopy provides shelter to a number of lingas worshipped by local communities, including the Soligas. The tree is on the banks of a river, Bhargavi. On the occasion of Mahashivaratri, several festivities including dance and prayers are traditionally performed around a fire by the Soligas.

The BR hills links the Eastern Ghats and the Western Ghats allowing animals to move between them and facilitating gene flow between populations of species in these areas. Thus, this sanctuary serves as an important biological bridge for the biota of the entire Deccan plateau.

The BR hills along with the Male Mahadeshwara Hills (MM Hills) range forms a distinctly unusual ridge running north-south amidst the plains of Bangalore (~900 m above MSL), Mysore(~800 m above MSL) and Krishnagiri(~450 m above MSL). The peaks of these lofty range rise as high as 1800 m (BR hills 1400 to 1800 m; MM Hills 1000 to 1200 m). The highest hill is Kattari Betta, at 1800 MSL. Various observations point to a possible biogeographic link between BR hills and Nilgiri ranges.

Panoramic view of the Biligirirangans. The pointed peak is Malkibetta, to its left is the high ridge of Honnematti.

The sanctuary, ~35 km long north-south and ~15 km wide east-west is spread over an area of 540 km2 with a wide variation in mean temperature (9 °C to 16 °C minimum and 20 °C to 38 °C maximum) and annual rainfall (600 mm at the base and 3000 mm at the top of the hills) The hill ranges, within the sanctuary raise as high as 1200 m above the basal plateau of 600 m and run north-south in two ridges. The wide range of climatic conditions along with the altitude variations within the small area of the sanctuary have translated it into a highly heterogeneous mosaic of habitats such that we find almost all major forest vegetation types – scrub, deciduous, riparian, evergreen, sholas and grasslands.

The forests harbour close to 800 species of plants from various families and shows a close affinity to the Western Ghats.[3]

By Road (From Bangalore): Take the Bangalore – Mysore highway, and drive till Maddur. Turn left after leaving Maddur and drive till you reach Malavalli. Continue driving past Malavalli and get to Kollegala town. BR Hills is another 30 minutes drive from Kollegala.Those who come from Coimbatore can take either KSRTC or TNSTC to reach Chamarajanagar, buses ply every 20 minutes. Train : Nearest train station is in Chamarajanagar, 40 km from BR Hills. Daily 6 trains connect Chamarajanagar with Mysore and one among the six goes to Tirupati via Bangalore . Flight : Mysore Airport is the nearest domestic airport, Which has tri-weekly non-stop flights to Bangalore operated by Spicejet. Coimbatore Airport, 185 km from BR Hills, is nearest international airport. But Coimbatore has less connectivity compared to Bangalore International Airport which is 220 km from BR Hills.

The Biligiris are Charnocktite hills, covered with tropical dry broadleaf forest, part of the South Deccan Plateau dry deciduous forests ecoregion. The forests range from scrub forests at lower elevations, degraded by over-use, to the tall deciduous forests typical of the ecoregion, to stunted shola forests and montane grasslands at the highest elevations, which exceed 1800 meters. The forests form an important wildlife corridor between the Western Ghats and the Eastern Ghats, linking the largest populations of Asian elephants and tigers in southern India.

The most conspicuous mammals in the BR Hills are the herds of wild elephants. The BR hills is the only forest east of the main Western Ghats mountain ranges in the central southern peninsula to harbour these pachyderms in large numbers. The forests were the study area for R. Sukumar, a scientist who studied the elephants of the area in the early eighties. A recent survey has revealed the presence of 17 tigers in this sanctuary.[4] The forests are well known for many gaur, the largest bovines. BR hills are a good place for viewing many other large and small animals. There are about 26 species of mammals recorded in the sanctuary.

The other mammals include sambhar, chital, the shy barking deer which are quite common here and the rare four-horned antelope. Carnivores include tigers, leopards, wild dogs, lesser cats and sloth bears and among arboreal mammals two species of primates and three species of squirrels including the giant flying squirrel are recorded. A recent (2005) survey of tigers by DNA analysis of scat samples has revealed 17 tigers, although the number may be more. 254 species of birds recorded in the BR hills.[5][6][7][8] These include the enigmatic southern population of the white-winged tit (Parus nuchalis), a specimen of which was collected by R. C. Morris and now housed in the Natural History museum at Tring. A recently discovered species includes a microhylid frog Microhyla sholigari, named after the Soligas, an indigenous tribe that inhabit these hills. 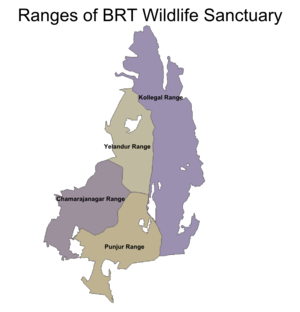 Map of the BR Hills Wildlife Sanctuary showing the four ranges and the borders. The white areas are non-forest settlements and coffee estates

The forests are managed by the Karnataka Forest Department. An IFS officer of the rank of a Deputy Conservator of Forests is in charge of the sanctuary. The officer operates from his office in Chamarajanagar. For administrative convenience, the sanctuary is divided into four ranges – Yelandur, Kollegal, Chamarajanagar and Punjur ranges, with the Kollegal range being the largest. Each range is in turn headed by a range forest officer.

For hundreds of years, this region has been the home for the semi-nomadic Soliga tribe. The forest regions of Yelandur, Chamrajanagar and Kollegal, including the hilly tracts and foothills of Biligirirangan and Male Mahadeshwara in the southern part of Karnataka, are inhabited by nearly twenty thousand Soliga tribal people. The Soligas inhabiting this range were nature worshippers originally, and revere a large Champaka tree (Michelia champaca), called Dodda Sampige in the local language.[9] (See Soliga section for details)

Randolph C. Morris, a Scotsman introduced Coffee into the hills in the latter half of the 19th century. The estate he established at Honnametti was maintained by his son Col. Ralph Morris, a hunter-naturalist, who published prolifically about the Natural history of the hills in the Journal of the Bombay Natural History Society. He left the hills after independence, and the estate is privately owned. His daughter, Monica Jackson, revisited the places and wrote about her memories in the book Going back. Among the many reputed guests that Col. Morris had, were Dr. Salim Ali, who visited him during the Birds of Mysore survey and E P Gee, a naturalist. The estate still preserves the home of the Morrises. Not far from this estate is the Honnametti Kallu, a boulder which gives a metallic clang when struck with a rock. Soliga legend has it that the rock has gold within. Honnametti itself means 'golden footprint' and refers to a legend that the Lord Ranganatha leapt across the hills changing his shape at each step and leaving his footprint on the hills.[10]

The hills are famous for the temple of Lord Ranganatha or Lord Venkatesha which is situated on the highest peak of the hill range, on the 'white cliff' which gives the hill its name. The local form of the deity is called Biligiriranga and is depicted in a unique standing position. The Annual Car festival of the deity held during “Vaishakha “in the month of April, is famous in the region and attracts thousands of pilgrims from far and wide., the ratha festival is celebrated at Biligiriranga Hills. The local tribes present a large pair of slippers measuring 1-foot (0.30 m) and 9 inches, made up of skin, to the Ranganathaswamy once in two years.[11]

There have been numerous megalithic burial sites that have been discovered from within and in the immediate vicinity of the sanctuary, testifying to the presence of indigenous people in these regions for a long time.

There are two local NGOs which work for integrated tribal development and biodiversity conservation in the sanctuary.

Quarrying in the fringes of the hills is rampant after the brief lull of activities during the time when the dreaded bandit Veerappan was on the run. After his death, the quarrying activities have taken off with renewed vigour with strong political backing. The forest department and the local NGOs were instrumental in banning disposal of plastic within the sanctuary.[12]