Nagarjunsagar-Srisailam Tiger Reserve is the largest tiger reserve in India . The reserve spreads over five districts, Nalgonda District, Mahbubnagar district, Kurnool District, Prakasam District and Guntur District. The total area of the tiger reserve is 3,568 km2 (1,378 sq mi).[1] The core area of this reserve is 1,200 km2 (460 sq mi). The reservoirs and temples of Srisailam are major attraction for many tourists and pilgrims.[2] 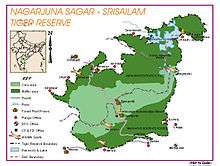 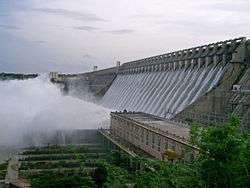 Average annual rainfall is 1,000 mm (39 in) The multipurpose reservoirs, Srisailam and Nagarjunasagar, are located in the reserve.

The area consists mostly of the Nallamala Hills but varies from plains to precipitous cliffs. More than 80 per cent of the area is gently rolling to hilly. High hills, deep valleys and gorges are characteristic features. The hill ranges contain number of plateau of which Amrabad, Srisailam, Peddacheruvu, Sivapuram, Nekkanti are noteworthy.

Nagarjunasagar receives rains from the southwest monsoon which is active from second half of June to the end of September. After a dry spell of one month during October, the northeast monsoon becomes active. The wildlife is generally confined to plateaues during monsoon and in valleys during summer.

The perennial water sources are generally located in the valleys and the plateaus suffer from acute scarcity for water during summer. The Krishna river cuts its basin almost 200 m (660 ft) deep over a distance of 130 km (81 mi) through the reserve. There are several waterfalls in the reserve such as the Ethipothala Falls, Pedda Dukudu, Gundam and Chaleswaram.[2]

The ancient temples at Srisailam of Lord Mallikarjuna and his consort goddess Bhramaramba, an incarnation of Parvathi as the fair-complexioned boon from Brahma, contain one of the twelve sacred Shaiva Jyotirlingas and one of the eighteenMaha Shakthi peethas in India.

This area contains ruins of the ancient Nagarjuna Viswa Vidyalayam run by the great Buddhist scholar Nagarjunacharya (150 AD), a southern Indian master of Mahayana Buddhism who is believed to have been responsible for the Buddhist activity in the area. The site was once the location of many Buddhist universities and monasteries.

The ruins of a fort of the 3rd century BCE Indian ruler, Ikshwaku Chandragupta overlook the Nirjivapuram (Lifeless city) valley. The ancient fort of king Pratap Rudra of the Kakatiya dynasty and several other forts are visible on the banks of the Krishna River. An ancient 105 mi (169 km) wall constructed there by the Kakateeyas is an impressive historic feature.

The Nagarjunasagar-Srisailam Sanctuary was notified in 1978 and came under the protection of Project Tiger in 1983. The reserve was renamed as Rajiv Gandhi Wildlife Sanctuary in 1992. Before Indian independence in 1947, the southern half of the reserve was under control of the British in India while the northern half was controlled by the rulers of the princely State of Hyderabad, who maintained it as a hunting reserve for royalty and their guests.[2][3]

In 1983 there were 40 tigers in the reserve. The habitat suffered severely due to high frequency of poaching, grazing, fires and exploitation of trees and bamboo. Improvements in water resources, check dams, artificial troughs, new fire lines, salt licks and better protection has helped restore the habitat. In 1989 the tiger numbers were put at 94 an increase of 130% in 6 years. There was no other census till 1993 due to extremist interference in the area.present population of tigers by september 2016 is 110.[4]

The presence of armed extremists in this forest is a serious problem to the effective management of this area and the tigers. The subordinate staff are scared to move freely in the interior and little communication exists. The forest is an oasis for five surrounding districts and meets their demand for timber and fuel. The smugglers operate in the interior areas and move timber to the plains.

There is a considerable grazing pressure on the fringe areas, that also affects the core. If not contained this pressure can make serious inroads into the core.

Attacks by tigers on cattle and humans are a problem that require solutions, and it all concerns the pressures on this natural resource.[4]

About 200 villages are situated in and around the reserve of which 120 villages are within the sanctuary limits. There are 24 villages in the core area of the reserve, comprising 557 families with a population of 2,285 mostly Chenchu people. 8,432 families with a population of 43,978 live within the sanctuary limits outside the core. 80 villages with 24,531 families consisting of 122,751 people live in the fringe areas. The overall population density of the reserve is 0.2 persons per km2. The population grew at the rate of 1.3 per cent over the inter-census period 1981-1991.

There are about 15,000 domestic animals in the villages in the core area. The annual growth is around 400. Livestock population in non-core part of the reserve is 43,350. Around 300,000 migratory cattle enter into the reserve from the plains, immediately after the onset of monsoons.[2]

One village has been relocated in 10 years. Efforts to relocate other villagers have been made but it is felt that these Chenchu tribals could also co-exist with the natural system since their needs are basic and simple. In this situation it is better to work with the people to protect the forest. There is a village on the Srisailam highway that is expanding into agriculture, and serious attention should be given to its relocation in the future, before major encroachments are made into the forest.[4]

Administratively this Project Tiger circle has staff drawn from 5 adjoining districts and under prevailing rules they have to be posted in the area of their districts. If management strategies are to be strengthened all the buffer area must be in the control of the field director. The forest staff face serious obstacles due to the presence of extremists in the day-to-day management of the area and it is to their credit that they have managed to shoulder their work with courage. Low herbivore populations and the question of cattle lifting by tigers needs to be researched, and a detailed analysis of the prey base is essential.[4]

The future plans of the park management include: water resources development, welfare measure for people, pasture plantations, bio-gas plants, solar pump sets, smokeless chullahs have been organised to some extent but much more is required through the offices of Project Tiger. Boats, jeeps and wireless networks are required to deal with smugglers and extremists. More pasture lands need to be created and a restocking of the denuded and depleted hill slopes is needed. Fire fighting squads need to be increased.

The park has an environmental educational centre that is functioning and will be enhanced further to increase an awareness to nature. Unless extremist activity is brought under control, serious management and research in this the largest Project Tiger reserve will suffer tremendously. So far no research project has taken place and without serious information the problems will not find solutions.[4]