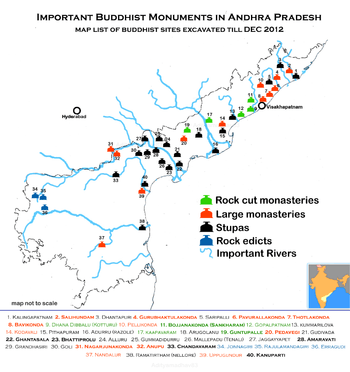 The Gundlakamma (Telugu: గుండ్లకమ్మ నది) is a seasonal river that flows through the east central part of the state of Andhra Pradesh, India. It arises in the Nallamalla Hills, an offshoot of the Eastern Ghats. Its main headwaters lie some 6 kilometers from the village of Ardhaveedu, Prakasam District at an altitude of 425 m. above MSL.[1] Numerous mountain streams join it as it descends down the thickly forested hills through a series of curves and tight bends. It follows a north-easterly direction and enters the plains near Cumbum, after flowing through a town named after it. Gundlakamma is the largest of all the rivers that originate from the Nallamalla Hills.

A 15th-century dam built by the Gajapati kings[2] straddles the river on its entry into the plains. It is an earthen dam that plugs the narrow outlet of a wide gorge that the river flows through. Called the Cumbum Dam, it is 57 feet (17 m) high, has a drainage area of 430 square miles (1,100 km2) and a capacity of 3,696,000,000 cubic feet (105,000,000 m3).[2] The river then flows past the town of Markapur and towards the Coromandel Coast through Addanki town. It finally enters the Bay of Bengal, some 19 km east of Ongole after having covered a distance of 225 km.

Apart from the ancient dam at Cumbum mentioned above, a modern dam called Gundlakamma Reservoir Project too has been constructed across the river at Mallavaram, Prakasam District. Some 80 feet (24 m) high, this dam has a capacity of 3,800,000,000 cubic feet (110,000,000 m3) and can irrigate 80,600 acres (330 km2) of land. It will also provide drinking water for the 250,000 people living in Ongole and its surrounding hamlets.[3] The lower part of the river basin is irrigated by Krishna river water through Nagarjuna Sagar right bank canal.

Though a tamed river generally, the heavy monsoonal rains in 2001 caused the river to burst its banks and flood areas along its course. About 15 people were washed away by its gushing waters in the month of October, 2001.[4]