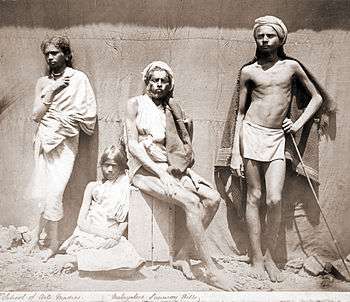 People of the Tamil tribe, in the Shevaroy Hills (1860s).

The Servarayan hills (Tamil: சேர்வராயன் மலை), with the anglicised name Shevaroy Hills, are a towering mountain range (1620 m) near the town of Salem, in Tamil Nadu state, southern India. It is one of the major hill stations in Tamil Nadu and in the Eastern Ghats.

The local Tamil name comes from a local deity, Servarayan.

The Servarayans form part of the southern ranges of the Eastern Ghats System. Shevaroys cover an area of 400 square kilometres (99,000 acres), with plateaus from 4,000–5,000 feet (1,200–1,500 m) above sea-level. The main town here is Yercaud. As earlier stated, it also represents the highest peak in southern part of the Eastern Ghats, with the Solaikaradu peak towering to 1620 m above mean sea-level. It is nestled parallel to the lower Chitteri - Kalrayan hills, just north of the Kolli Hills and Pachaimalai Hills hills. Westwards, lie the Mettur hills. This range forms an important link in the southern part of Eastern Ghats hill chain.

The Servarayan hills have several old coffee plantations, and a sanatorium. The major areas of tourist interest are the Yercaud Orchidarium of the Botanical Survey of India, and the old coffee estates.

Some patches of the original forests still exist in the Shevaroy hills and those in higher slopes and peaks contain several endemic species of plants and fauna. The faunal and floral elements high up here have stark similarities to the Western Ghats. Such highlights include Strobilanthes kunthiana (Neelakurinji) in the peaks here, which apart from upper reaches of Western Ghats, is not known from the Eastern Ghats elsewhere. Natural forests apart, coffee and citrus fruits, most notably oranges, are grown in abundance, as well as bananas, pears and jackfruit.