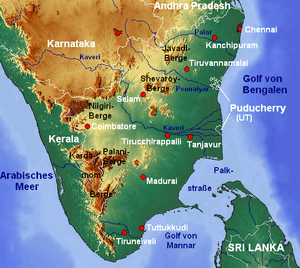 The Ponnaiyar (South Pennar) is a river in southern India. It rises on the hill of Nandidurg in Chikkaballapur District of Karnataka state, flowing south and then east for 400 km through Karnataka and Tamil Nadu, emptying into the Bay of Bengal at Cuddalore. Tirukkovilur is the largest city in the path of Ponnaiyar River.

The South Pennar River is known as Dakshina Pinakini in Kannada and Thenpennai in Tamil. It is also referred as Ponnaiyar .

The river originates in the Nandi Hills in the Chikkaballapur district of Karnataka and flows through Tamil Nadu before emptying into the Bay of Bengal. It has a catchment area of 1,424 square miles (3,690 km2) located in Karnataka, Tamil Nadu and Andhra Pradesh states. Kelavarapalli dam is built across this river near Hosur.[1] The Krishnagiri dam and Sathanur Dam are also built across this river. Moongilthuraipattu Sugar Factory is situated on the bank of river.

The river is dry for the most part of the year. Water flows during the monsoon season when it is fed by the south-west monsoon in catchment area and the northeast monsoon in Tamil Nadu. However this water flow raises the water table throughout the river basin and feeds numerous reservoirs/tanks.

The old river Dakshina Pinakini does not exist anymore.[2] Some of Bangalore's sewage enters this river via Varthur Lake and other channels.[3]

The sand build of the river is quite impressive, suggesting that it may have been a perennial river with much larger water flow in the past. Mention of the river is found in Sangam and medieval (Thevaram - Bhakti cult era) literature, where it is depicted as rich with lush vegetation on its banks. There are various temples on its banks. It ends in the Bay of Bengal at the Cuddalore District.

This river is now looted for its rich availability of sand. As the water flow will be only in monsoon seasons, the river is dry in remaining parts of the year.