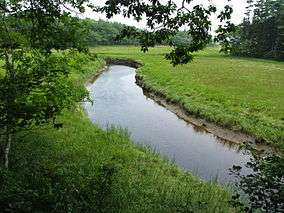 A tidal marsh is a type of marsh that is found along coasts and estuaries of which the flooding characteristics are determined by the tidal movement of the adjacent estuary, sea or ocean.[1] According to the salinity of the flooding water, freshwater, brackish and saline tidal marshes are distinguished. Respectively, they may be classified into coastal marshes and estuarine marshes.

They are also commonly zoned into lower marshes (also called intertidal marshes) and upper or high marshes, based on their elevation with respect to the sea level.[1][2]

In addition they may also be classified into back-barrier marshes, estuarine brackish marshes and tidal freshwater marshes, according to the degree of the influence of the sea level.[2]

Tidal Marshes can contain island off their shore called barrier islands. These cigar shaped islands form parallel and close to the shoreline of a tidal marsh.[3] The islands fully exposed during low tide look like a hill, and during a high tide being fully surrounded by water look like an island. Formation of barrier islands have been explained in many ways by history’s scientific minds, some mechanisms of barrier island formation are offshore bar theory, spit accretion theory, and formation can even be due to climate change.[4][5] Contrary to what one might think the presence of saline resistant plants does not affect the erosion rates of tidal marsh islands, rather the contributing factor to erosion rates is the soil type of the island.[6]