Gut is a geographical term with two meanings: 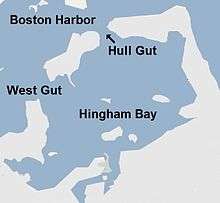 Hull Gut shows the classic conditions for a gut: a large body of water, subject to tides, drained through a small channel, resulting in heavy flow and strong currents

Many guts are straits but some are at a river mouths where tidal currents are strong. The comparatively large quantities of water that flow quite quickly through a gut can cause heavy erosion that results in a channel deeper than the rest of the surrounding seabed, and the currents may present a hazard to ships and boats at times.

The term "gut" is primarily (though not exclusively) applied to channels of the coastal waters of the Atlantic coast of North America. A similar term of related but not identical meaning, "gat", is applied to some narrow waterways of the North Sea and Baltic Sea coasts of Europe.

Some bodies of water named "Gut" are:

View across Hull Gut in Massachusetts to Peddocks Island

Many other channels in Canada are named "Gut".[8] Applied to proper names, "gut" is sometimes used more broadly. For instance South Gut and North Gut at the settlement of South Gut St. Anns, Nova Scotia are just inlets, while Brewery Gut in England and The Gut in Ontario are fast-flowing stretches of river, Jigsaw Rock Gut in Antarctica is a gully, and Gardner's Gut in New Zealand is a cave system. Conversely, some guts are not so named, such as The Rip, a gut in Australia, where the term "gut" is not used.

Another meaning for "gut" in geography is a small creek,[1] and this is seen in proper names in eastern North America from the Mid-Atlantic states (for instance, The Gut in Pennsylvania, Ash Gut in Delaware,[9] and other streams)[10] down into the Caribbean (for instance Guinea Gut, Fish Bay Gut, Cob Gut, Battery Gut and other rivers and streams in the United States Virgin Islands, in many rivers and streams of the Dutch Caribbean, and in Jamaica (Sandy Gut,[11] Bens Gut River,[12] White Gut River)).[13]