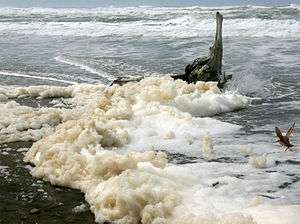 Sea foam, ocean foam, beach foam, or spume is a type of foam created by the agitation of seawater, particularly when it contains higher concentrations of dissolved organic matter (including proteins, lignins, and lipids)[1] derived from sources such as the offshore breakdown of algal blooms. These compounds can act as surfactants or foaming agents. As the seawater is churned by breaking waves in the surf zone adjacent to the shore, the presence of these surfactants under these turbulent conditions traps air, forming persistent bubbles that stick to each other through surface tension. Due to its low density and persistence, foam can be blown by strong on-shore winds from the beachface inland. 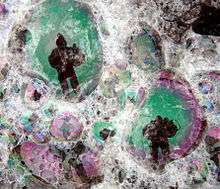 Close-up of sea foam on a tide pool

Where polluted stormwater from rivers or drains discharges to the coast, sea foam formed on adjacent beaches can be polluted with viruses and other contaminants,[2][3] and may have an unpleasant odour.[4]

If crude oil discharged from tankers at sea, or motor oil, sewage and detergents from polluted stormwater are present, the resulting sea foam is even more persistent, and can have a chocolate mousse texture.[3]

If the foam forms from the breakdown of a harmful algal bloom (including those caused by some dinoflagellates and cyanobacteria), direct contact with the foam, or inhalation of aerosols derived from the foam as it dries, can cause skin irritations or respiratory discomfort.[1][2]

On rare occasions large amounts of sea foam up to several metres thick can accumulate at the coast and constitute a physical hazard to beach users, through concealing large rocks and voids, storm debris and, in northern New South Wales, there are even anecdotes of sea snakes.[2]