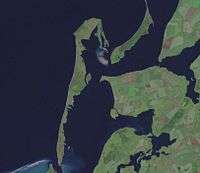 Part of the West Rügen bodden chain (centre), separated from the Baltic Sea (left) by the seahorse-shaped island of Hiddensee; seen from Landsat 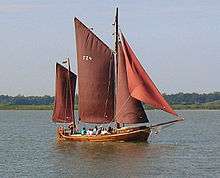 Island of Hiddensee, Vitte Lagoon in the rear, Baltic Sea beach in the front.

Aerial view of Saaler Bodden with Permin Bay, separated from the Baltic Sea (bottom left) by the narrow Fischland peninsula

Bodden are briny bodies of water often forming lagoons, along the southwestern shores of the Baltic Sea, primarily in Germany's state of Mecklenburg-Vorpommern. These lagoons can be found especially around the island of Rügen, Usedom and the Fischland-Darss-Zingst peninsula. Some of them are protected reserves, forming the Western Pomerania Lagoon Area National Park.

They have a distinctive geological origin and are enclosed by peninsulae, spits and islands, leaving only narrow connections to adjacent bodden or the open sea. Freshwater inflow from the mainland and saltwater inflow from the open sea, which depends on wind direction and force as well as the proximity of the bodden to the sea, result in fluctuating salt gradients and distinctive ecosystems.

During the Littorina Sea transgression, an island archipelago was formed by the carving of narrow glacial basins and channels resulting from meltwater. Bodden were formed in a comparatively short period between spits and offshore sandbars. These shallow glacial scoops were then subjected to extensive sedimentation during the Holocene, resulting in lakes with depths of no more than 4–6 metres. Thermal and saline stratification is extremely unstable under these conditions, and bodden have the typical dynamics of small bodies of water with a sea connection, which is a rapid filling and draining due to tidal and wind action, and inflow of fresh water. The frequent movement of water can lead to a scouring effect, but can also with heavy pollution show a tendency toward eutrophication.[1] Due to erosion of cliffs and sedimentary deposition, the shape of the bodden coasts remains unstable. Sudden changes have been caused by stormfloods, which repeatedly closed connections to the sea or opened new ones in the past.

While bodden-type bays can be found in Mecklenburg and Denmark, the most typical bodden are located off the Pomeranian mainland between the mouth of the Recknitz river and the island of Usedom. Several adjacent bodden between the Fischland-Darß-Zingst peninsula, Hiddensee, the northern and western peninsulae of Rügen and the Pomeranian mainland are grouped as Bodden chains (Boddenketten):

The bodden are important sanctuaries for many species of birds and are especially important resting places for migratory birds like cranes and geese. This was the reason for the establishment of the Western Pomerania Lagoon Area National Park (Nationalpark Vorpommersche Boddenlandschaft), comprising most of the bodden between Darß and Rügen.

Traditionally bodden have been good fishing areas, rich in mesolithic community sites, in particular the Pomeranian bodden of Rügen, Greifswald and Peenestrom. From these waters anglers regularly land 10–15 kg pike.[2]