Gainare Tottori (ガイナーレ鳥取, Gaināre Tottori) are a Japanese football club, based in Yonago, Tottori. They play in the J3 League. Their team colour is green.

Their team mascot is a Japanese horror anime character Ge Ge Ge no Kitaro created by Shigeru Mizuki, a native of Sakaiminato, Tottori.

The club was founded in 1983 as Tottori Teachers' Soccer Club (鳥取教員団サッカー部 Tottori Kyōin Dan Sakkā Bu). They opened their gate to players with other professions in 1989, renaming themselves S.C. Tottori. They adopted their current name in 2007.

They were promoted to the Japan Football League after finishing runners-up in the 2001 Regional League play-off. Nonprofit organisation Yamatsumi Sports Club operate the club.

After defeating Arte Takasaki 1–0 on October 3, 2010 in their home stadium, at last they could secure JFL top four after failed attempts on two previous seasons. The confirmation from J. League about their promotion to J2 came on November 29. They won the JFL title on October 24, 2010 with five games remaining. 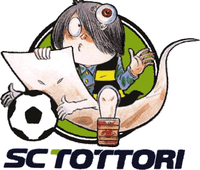 They play their home games mainly at Torigin Bird Stadium in Tottori City. Tottori Soccer Stadium is the only stadium in San'in region that meets the J. League requirements. As their home town is Yonago, the club tries to persuade the city council to upgrade Higashiyama Athletics Stadium to clear the requirements but the budget constraint of the city council means it is not likely to happen in the near future.

As of 16 July, 2016. Note: Flags indicate national team as defined under FIFA eligibility rules. Players may hold more than one non-FIFA nationality.