pronunciation )[3] is a city in the northwest region of Maharashtra in India, and is the administrative headquarter of the Nashik District and Nashik Division.

The city is situated at the foothills of the Western Ghats mountains on the banks of the river Godavari. At 700 m (2,300 ft) above sea level, its elevation is highest among the major cities in Maharashtra and one of the highest among million plus cities in India.[4] 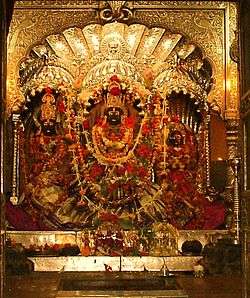 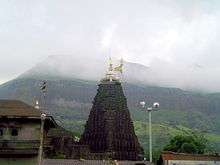 Trimbakeshwar Temple near Nashik (source of the Godavari River)

Nashik is in northern Maharashtra at 700 m (2,300 ft)[5] from the mean sea level. The river Godavari originates 24 km (15 mi) from Brahmagiri Mountain, Trimbakeshwar, Nashik and flows along the northern boundary of the city through the old residential settlement. The river had been dying at an alarming rate due to pollution created by factories. But it has been successfully cleaned.[6] Other than Godavari, important rivers like Vaitarana, Bhima, Girana, Kashyapi and Darana flow across Nashik.[7]

Nashik lies on the western edge of the Deccan Plateau which is a volcanic formation.[8] All over the district, lime nodules and kankar are found. Jalgaon and Aurangabad are to the east of Nashik. Ahmadnagar lies to the south while Thane and part of Gujrat are to the west of Nashik.[9]

The city's tropical location and high altitude combine to give it a relatively mild version of a tropical wet and dry climate. Summers, which last from March to mid-June, are hot, with maximum temperatures reaching 36 °C, but are extremely dry. They are followed by the monsoon season, which continues till early October. These months see high levels of cloud cover, torrential rains, and flooding. Temperatures rise slightly in October, but this is followed by the cool season from November to February. The cool season sees warm temperatures of around 28 °C during the day, but cool nights, with lows averaging 13 °C, and extremely dry air.

Nashik city is governed by the Nashik Municipal Corporation.[11]

The Nashik Court Building is built in black stone in British Regime and the new building was inaugurated on 18 September 2005. There are 73 courts including taluka court.[12][13]

In the Nashik Municipal Corporation area about 225 MT of solid waste is generated per day. Unlike other Indian cities, this garbage is collected by vehicles titled 'Ghantagadi' (meaning the vehicle with a bell): a system which has resulted in a 'garbage dump free' city. Smaller versions of the ghantagadi ply in the congested old city areas. A plant has been set by the Nashik Municipal Corporation near Pandav Leni (Pandavleni Caves) to process the garbage and convert into compost.[14] 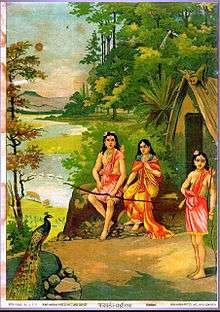 Rama and Sita in Panchavati

Panchavati has significant religious attributes for Hindus with a temple complex on the bend of the Godavari river, which includes Kalaram Temple.[17] It is a pilgrimage site,[18] with the Kumbh Mela, the largest peaceful gathering in the world – involving over 10 crore people in 2013, taking place here once every 12 years in rotation with Haridwar, Allahabad, and Ujjain.[19]

Panchavati was the name of a section in the huge forest of Dandakaranya, where Rama with the help of his brother Lakshmana built a nice hut they could call a home in what would eventually become the crucial part of their exile in the wilderness. Panchavati literally means "a garden of five banyan trees". These trees are said to have been there during the exile of Lord Rama.[20][21] There is a place called Tapovan where Lakshmana, the brother of Rama, cut off the nose of Surpanakha, the sister of Ravana, when she attempted to kill Sita. The entire Aranya Kanda (book of the forest) of Ramayana is set in Panchavati.

Ramkund is a holy place for Hindus. Devotees believe that a dip in this tank will fulfil their wishes. According to the epic Ramayana, Lord Rama used to bathe in this tank during his stay in Nashik.[22]

Muktidham is on Nashik road. This temple with intricate architecture was constructed out of white marble. It has carvings of 18 chapters from the Bhagawad Gita, believed to be the great Indian religious text, 12 Jyotirlinga and idols of Hindu deities.[22]

Kalaram Temple is dedicated to Lord Rama. The meaning of 'kalaram' is black Rama.[22]

Sundarnarayan Temple is on the corner of Ahillyabai Holkar bridge. This temple was built in 1756 by Chandrachud. The sanctum sanctorum houses the idol of Lord Vishnu. It is built in so that the very first rays of the sun falls on the deity of Lord Vishnu.[22]

The holy bath tank known as Kushavarta is 5 minutes from the main temple. This Kushvarta holds greater importance during the Kumbhmela shahi snan. At Kushavarta river Ganga takes route to the rest of the India. The origin of this river Ganga named here as Godavari is at top of the Bramhagiri hill. This holy pond is always full with Godavari water, never dries up and no body knows from where the water comes into the pond and forms the river.[23][24]

Dugarwadi waterfall is situated on Godavari river near Trimbakeshwar and 30 km away from Nashik. Known as one of the most beautiful natural waterfall in Maharashtra.

This is one of the oldest temples dedicated to Lord Shiva and Lord Hanuman. This place is 6 km from Nashik on the road to Gangapur. The temple is on the banks of the Godavari river.[25]

It is one of the oldest temples in Nashik. There is no icon of Nandi (bull) in this temple which is an uncommon for the temples of Lord Shiva.[25]

The coin museum in Nashik houses a huge collection of coins, replicas, line drawings, articles and photographs of coins from manys eras and kingdoms in Indian history.[26]

Nandur Madhmeshwar Bird Sanctuary is situated at Niphad Tehsil of Nashik district and is famous for its many resident as well as migratory birds species.

Pragati Aerospace Museum is also known as HAL aerospace museum. It is situated at Ozar, Nashik District. It showcases the history of HAL in pictorial form. Also some models of air-crafts built by HAL for Indian Air Force are kept in museum.

Dadasaheb Phalke Smarak is a very good memorial to the legendary film-maker Dadasaheb Phalke . This garden is situated on the Nashik-Mumbai highway at the foot of Pandavleni Caves. It also includes place for meditation,conference hall and also an exhibition center with a beautiful fountain.[30]

Ramshej Fort is 10 km from Nashik near Pindori village.The literal translation of Ramshej is 'Ram's bedstead'. According to Indian mythology Lord Rama used to rest on this fort. The fort is flat and on open ground. Trees around the fort are also mild.[31] The fort also has historical significance.[32]

Trigalwadi fort is 3000 ft above sea level. There is temple of Lord Hanuman nearly to it. There is also a Trigalwadi Lake. It takes almost 1 hour to see spots on the fort.[33][34]

Harihar Fort is derived by the name Harshgad. Its highest point is 1,120 metres above sea level. It is famous for its cliff for chimney-style climbing and its named as Scottish Fall.[35][36]

Nashik hosts one of the largest religious gatherings in the world known as Maha Kumbh. The Ardh (half) Kumbh Mela is celebrated every six years at Haridwar and Allahabad and the Purna (complete) Kumbh takes place every twelve years at four places in Allahabad, Haridwar, Ujjain, and Nashik. According to the Puranas, it is believed that Kumbh derives its name from an immortal pot of nectar, which the devtas (Gods) and demons fought over. The four places where the nectar fell are at the banks of river Godavari in Nashik, river Kshipra in Ujjain, river Ganges in Haridwar and at the sangam of Ganges, Yamuna and Sarswati in Allahabad.[38][39]

Shahi Marg, the path which sadhus follow to the banks of Godavari for the holy bath, stretches from Tapovan via Nag Chowk, Kalaram Temple and Sardar Chowk. In the 2003 Kumbhmela 29 pilgrims were killed at Sardar Chowk in a stampede. In 2015, to avoid such accidents NMC planned to widen the road from 9 metres to 15 metres in some area.[40]

Maharashtra university of health science(MUHS) is in Nashik, this is the centralised university governing the medical, dental, homoeopathic, ayurvedic and allied courses of Maharashtra[41] [42]

In early 1925, the table grape revolution was started in Ojhar, a small town near Nashik, by Mr. Raosaheb Jairam Krishna Gaikwad. Today, table grapes are exported to Europe, the Middle East, and Asia.[43]

The Nashik Municipal Corporation has made it mandatory for new constructions in the city to install a rainwater harvesting system without which a completion certificate is not granted. This measure is expected to help recharge the aquifers and augment the groundwater level.[45]

There is a Hindustan Aeronautics Limited aircraft manufacturing plant located 10 mi (16 km) from Nashik.[46] The Currency Note Press[47] and India Security Press are on Nashik Road, where Indian currency and government stamp papers are printed respectively.[48] Nashik also has textile industry, e.g., carpet weaving in remote areas like Surgana Block,[5] National Bank for Agriculture and Rural Development has selected Yeola Block for development of Paithani Cluster.[5] To facilitate the export a container freight station was started at MIDC Ambad by the Central Government.[49] 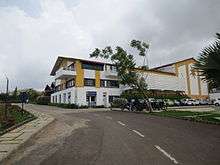 Nashik has been described as "The Wine Capital of India" by Alok Chandra of Business Standard due to the numerous wineries located within the district.[50] As of 2013, the Nashik region reportedly produces 10,000 tonnes of grapes per year.[51]

There are 22 wineries in Nashik, out of 46 wineries throughout India total.[52]

Nashik is home to several wine festivals, such as SulaFest in the harvest season .[53][54]

Bhonsala Military School[55][56] is the oldest residential school in Nashik. The city has two state-run universities, the Yashwantrao Chavan Maharashtra Open University and the Maharashtra University of Health Sciences.