Rishikesh (Hindi: ऋषिकेश; Sanskrit: हृषीकेश) is a city, municipal council and a tehsil in Dehradun district of the Indian state, Uttarakhand. Located in the foothills of the Himalayas in northern India, it is known as the 'Gateway to the Garhwal Himalayas'[1] and 'Yoga Capital of the World'.[2] Rishikesh is surrounded by three districts: Tehri Garhwal, Pauri Garhwal and Haridwar. It is approximately 25 km north of the city Haridwar and 43 km southeast of the state capital Dehradun. According to Census of India, 2011 Rishikesh had a population of 102,138 making it the 7th most populated city and the largest municipal council in the state of Uttarakhand. It is known as the pilgrimage town and regarded as one of the holiest places to Hindus. Hindu sages and saints have visited Rishikesh since ancient times to meditate in search of higher knowledge.[3]

In September 2015, the Union tourism minister Mahesh Sharma announced that Rishikesh and Haridwar will be the first in India to be given the title of "twin national heritage cities".[4] Due to the religious significance of the place, non-vegetarian food and alcohol is strictly prohibited in Rishikesh.[5]

IAST: "Hṛṣīkeśa" (Sanskrit: हृषीकेश) is a name of Vishnu composed of hṛṣīka meaning 'senses' and īśa meaning 'lord', thus 'Lord of the Senses'.[6][7] The name commemorates an apparition of Vishnu to Raibhya Rishi,[8] as a result of his tapasya (austerities), as Lord Hrishikesha.[9] In Skanda Purana, this area is known as Kubjāmraka (कुब्जाम्रक) as Lord Vishnu appeared under a mango tree.[7] Another legend says that fierce fire broke out here. Lord Shiva was angry with Lord Agni and cursed him. Then Lord Agni prayed here for the expiation of his sins. Hence it is also known as 'Agni Tīrtha' (अग्नि तीर्थ) — the holy place to do penance of Lord Agni or Fire God.[10]

Rishikesh has been a part of the legendary 'Kedarkhand' (the present day Garhwal).[11] Legends state that Lord Rama did penance here for killing Ravana, the asura king of Lanka; and Lakshmana, his younger brother, crossed the river Ganges, at a point, where the present 'Lakshman Jhula' (लक्ष्मण झूला) bridge stands today, using a jute rope bridge.[12] The 'Kedarkhand' of Skanda Purana, also mentions the existence of Indrakund at this very point. The jute-rope bridge was replaced by iron-rope suspension bridge in 1889. After it was washed away in the 1924 floods, it was replaced by the present stronger bridge. Another similar suspension bridge Ram Jhula was built in 1986 at nearby Sivananda Nagar.

The sacred river Ganges flows through Rishikesh. Here the river leaves the Shivalik Hills in the Himalayas and flows into the plains of northern India. Several temples, ancient and new, are along the banks of the Ganges in Rishikesh. Shatrughna Mandir, Bharat Mandir, Lakshman Mandir are the ancient temples established by Adi Shankaracharya. Shatrughna Temple is near Ram Jhula and Lakshman Mandir is near Lakshman Jhula.

As with Haridwar about an hour south, Rishikesh is considered by Hindus to be a holy city and is vegetarian by law. Meat and alcohol are not served in the city.[13] 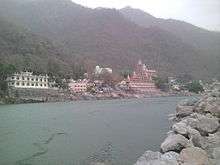 View of Rishikesh from beach

The Tehri Dam is just 80 km uphill on the way to Gangotri. Rishikesh is the starting point for travelling to the four Chota Char Dham pilgrimage places — Badrinath, Kedarnath, Gangotri, and Yamunotri.

Rishikesh is famous for ayurvedic treatments. Many ayurveda centres are run where classes are given by ayurvedic doctors.

According to Köppen-Geiger climate classification system, its climate is humid subtropical (Cwa).

Despite the pollution of the Ganges, the water in Rishikesh is relatively unaffected by the pollution as the major polluting points are down the course of the river in the neighbouring state of Uttar Pradesh.[15]

See also: List of cities in Uttarakhand by population

Rishikesh, sometimes nicknamed "Yoga Capital of the World",[18] has numerous yoga centres that attract tourists. It is believed that meditation in Rishikesh brings one closer to attainment of moksha, as does a dip in the holy river that flows through it.

The name Rishikesh is loosely applied to an association of five distinct sections encompassing the town and hamlets and settlements on both sides of the river Ganges. These include Rishikesh itself, the commercial and communication hub; the sprawling suburb Muni Ki Reti or the "sands of the sages"; Sivananda Nagar, the home of Sivananda Ashram, | Tattvaa Yogashala and the Divine Life Society founded by Swami Sivananda, north of Rishikesh; the temple sections of Ram Jhula and Lakshman Jhula, a little further north; and the assorted ashrams around Swargashram on the eastern bank. The Ganga Arti performed at dusk at the Triveni Ghat is popular with visitors. Neelkanth Mahadev Temple, amidst forest 28 km from Rishikesh, is a popular local pilgrimage, along with Vashishtha Guha (Cave of Sage Vashishtha), 21 km up from the town by the Ganges. Over the years, it has established itself as the yoga capital of the world. From the US, Europe and China and Australia, serious yoga students come to learn asanas and kriyas that will help them lead a healthy life.[3]

Rishikesh is home to the 133-year-old Kailash Ashram Brahmavidyapitham, an institution dedicated to preserve and promote traditional Vedantic studies. Prominent personalities such as Swami Vivekananda, Swami Rama Tirtha and Swami Sivananda have studied in this institution.

In February 1968, The Beatles visited the Maharishi Mahesh Yogi's ashram in Rishikesh.[19] John Lennon recorded "The Happy Rishikesh Song".[20][21] The Beatles composed numerous songs during their time at the Maharishi's ashram, some of which appear on the White Album.[22] Several other artists, including Mike Love, The Beach Boys, Donovan and Gyp Mills visited the site to contemplate and meditate.[23] Former royal palace of the Maharaja of Tehri Garhwal at near by Narendranagar, now houses the Ananda–In the Himalayas destination spa and yoga retreat, estb. 2000.[24]

The Prince of Wales and Duchess of Cornwall visited Rishikesh in 2013 and participated in the Ganga arti.They also conducted a special havan for world peace at the Parmarth Niketan. Charles said: "I am amazed by the experience of sitting on the bank of one of the ancients rivers of the world. It is the right time for us to rediscover our connection with nature."[25] 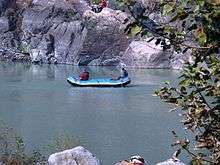 Rishikesh is becoming a popular spot for white water rafting enthusiasts, both from India and abroad, as the Ganges offers medium to rough rapids rated class 3 and class 4.[26] The rafting season starts in March and ends in September. Rishikesh is also a center for backpacking, bungee jumping, hiking, kayaking, mountain biking, rock climbing, rappelling, and zip lining.[27][28][29]

As tourists from all over the world are attracted to Rishikesh for yoga, rafting, and traveling, Rishikesh has become an international attraction. Rafting in Rishikesh is a popular sport in summer, but due to violations of rules most rafting camps in Rishikesh cause pollution to the river. 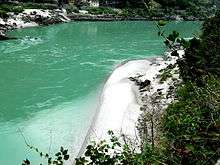 According to environmental activists, "These camps are not only in violation of Forest (Conservation) Act, 1980 but also the Environment (Protection) Act, 1986 as well as the Water (Prevention and Control of Pollution) Act, 1974 as it is leading to pollution of Ganga by discharging effluent, throwing of solid waste directly and adversely affecting the ecological integrity of the river system."

Environmental activists alleged that these camps, which are established as temporary sites, do not have adequate sewage and sanitation facilities, disturb the habitat of wild animals and "affect the peace, tranquility and serenity of the forest area."

"At the camp sites, the camp owners permit employees and the visitors to have food and alcohol. They leave empty bottles, cans, unconsumed food and waste including bones and filth in and around the camp site."

In a 2008 study on the beach camps between Kaudiyala and Rishikesh, experts from the Govind Ballabh Pant Himalayan Environment and Development Institute — R. K. Maikhuri, Nihal Farukhi and Tarun Budhal — found that wildlife conservation standards and norms, particularly for waste management, were routinely disregarded.

A bench headed by the National Green Tribunal chairperson Justice Swatanter Kumar on 1 April 2015 heard a plea filed by the non-governmental organisation Social Action for Forest and Environment (SAFE). The National Green Tribunal has sought explanations from the Government of India and the Government of Uttarakhand on the "unregulated" operation of rafting camps on the banks of Ganga between Shivpuri and Rishikesh in Uttarakhand. The state government has assured the tribunal that it would not grant permission to any new camp till the next hearing in May.[30][31][32][33][34][35]

As the seriousness of issue "The National Green Tribunal," a bench headed by Justice U. D. Salve has reject permission to rafting camps operating in Rishikesh and slammed the Ministry of Environment and Forests (MoEF) and the Government of Uttarakhand for not filing their replies in the case and directed them to file their response.[36][37] 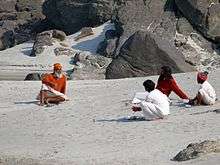 Chit chat at bank of River Ganga at Rishikesh 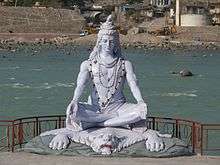 It has been reported that large numbers of tourists visiting Rishikesh from India and the world have been consuming drugs and alcohol and appearing partially naked at beaches, leading to complaints that the spiritual environment of the area has been affected.[38][39][40][41]

According to many Hindu yogis and sadhus, the riverside stretch is of spiritual and religious importance, as it is where the Ganges takes its form after the confluence of the rivers Bhagirathi and Alaknanda at Devprayag in the Garhwal Himalayas. Saints and yogis have been meditating on the banks of Ganges since antiquity. However, these banks have been polluted with liquor bottles at camps as well as obscene activities and behavior at the beaches.[40][42][43][44][45][46][47]

AIIMS Rishikesh is one of the six apex healthcare institutes being established by the Ministry of Health and Family Welfare, Government of India under the Pradhan Mantri Swasthya Suraksha Yojana (PMSSY) with the aim of correcting regional imbalances in quality tertiary level healthcare in the country and attaining self-sufficiency in graduate and postgraduate medical education and training.[48][49]

First Ayush Centre (The Department of Ayurveda, Yoga and Naturopathy, Unani, Siddha and Homoeopathy of India) was opened in Rishikesh on 4 June 2015 by Shripad Yasso Naik, Minister for Yoga and Traditional Medicine. He believes Ayurveda (Indian traditional medical science), Yoga, Naturopathy, Unani, Siddha, Homeopathy, and other alternative medicine systems will be researched in Rishikesh.[50]