This article is about the built-in app and Outlook Express replacement. For the free downloadable Microsoft mail client, see Windows Live Mail. For the pre-Exchange Microsoft email product, see Windows for Workgroups Mail.

Mail is an email and newsgroup client developed by Microsoft and included in the Windows Vista, 8, and 10 operating systems.[1][2] The main feature of Mail is sending and receiving email.[3] Windows Mail included fairly minimal changes to the application's user interface, but introduced major architectural changes when compared with its predecessor, Outlook Express, and is a fundamentally different application.[4] The different versions do not share a common code base, but they share similar functionality. Like in Outlook and Outlook Express, Mail uses Control + E, not Control + F, to search.

Windows Mail was announced by Microsoft as the successor to Outlook Express on October 10, 2005 via its community website Channel 9.[5]

Unlike Outlook Express, which was available for versions of Windows in the 9x series and Windows NT, Windows Mail is not available for operating systems prior to Windows Vista, and is also not as tightly integrated with the Internet Explorer web browser.[4] It is, however, integrated with Windows Calendar.

The origins of Windows Mail can be traced back to a pre-release version of Outlook Express 7 included in early builds of Windows Vista, then known by its codename, "Longhorn." This version of Outlook Express introduced various changes to the application's interface[10] and relied on WinFS for the management and storage of contacts and other data.[11]

While retaining support for POP and IMAP based e-mail servers, Outlook Express 7 dropped support for HTTP,[12] which is a change that would remain in the version of Windows Mail that shipped with Windows Vista.[13] 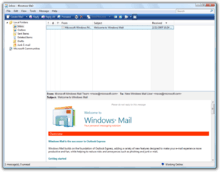 A screenshot of Windows Mail displaying a user's Inbox folder

Although the Windows Mail interface has only minor differences from Outlook Express, such as the toolbar icons being replaced to reflect the interface in Windows Vista and some interface features incorporated from Outlook 2003 including the right-hand "reading pane", larger changes have been made hidden from the user.

A new version of Mail with a text-heavy was added to Windows 8 as one of many apps written to run full-screen or snapped as part of Microsoft's Metro design language philosophy. It is one of three apps on Windows that originate from Microsoft Outlook, from which the Calendar and People apps also originate. Structurally, the three apps are one, but each has its own user interface. Mail in Windows 8 comes with preset server configurations for popular email services Outlook.com, Exchange, Gmail, AOL, and Yahoo. Other IMAP accounts can be configured,[18] but it does not directly support POP (Post Office Protocol). Even though this app does not run on the Windows desktop, it has multi-window support. Like many Microsoft apps introduced for Windows 8, many of the features are hidden in the Charms Bar or a menu at the bottom of the screen that is triggered by right clicking. When a user with a Microsoft account adds an email account on one computer with Windows 8 Mail, the account will be automatically added to all other Windows 8 computers the user is logged into.

Mail has preset server configurations for Outlook.com, Exchange, Gmail, iCloud, and Yahoo.[19][20][21] AOL and custom IMAP accounts can still be added, and POP support is added back in Windows 10 Mail.[19][21][22] Mail is integrated with and provides links to Calendar and People. Calendar is structurally the same app as Mail, but the two have different, complementary user interfaces; People is a standalone app that integrates with various Windows 10 apps, such as Mail and Calendar, Xbox, and Skype. It shares a similar design with Outlook.com's People manager but can be configured more.

Users can set Windows 10 Mail to use the system theme or choose a custom accent color, background image, and light/dark preference. It has multi-window support and can open .eml files in a new window;.[23] eml files are listed in Mail's jumplist. Mail uses a settings panel, email sorting tools in the second pane, and a mini Ribbon interface in the viewing pane. Like the Vista version of Mail, this version's important controls are readily visible. Accounts can be grouped and relabeled, and folders can be created from within the app. Most existing folders can be edited or deleted in Mail, but default folders cannot be.[24] It is possible to use Outlook.com aliases and @mentions with Mail.

Unlike Outlook for Windows PCs and Macs, Mail allows users to set up Quick Actions, such as Delete, Set Flag, and Archive, to respond to messages from system notifications and swipe gestures.[25]

Mail is missing an RSS reader and the ability to customize the default type and font. Microsoft has not announced plans to add these features. As of November 2016, many of the top-voted feedback items in the Windows Feedback Hub are related to Mail, but many of the requested features and changes have been added to Mail.