Talakadu is a desert-like town on the left bank of the Kaveri river 45 km (28 miles) from Mysore and 133 km (82 miles) from Bangalore in Karnataka, India. It once had over 30 temples, most of which now lay buried in sand. The extant group of temples, where the eastward flowing Kaveri river changes course as the sand on its banks spreads over a wide area, is a popular pilgrimage site for Hindus.[1] 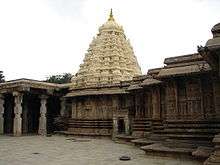 The origin of the town is lost in antiquity; but one tradition is that its name was derived from two Kirāta twin brothers, Tala and Kādu, who, cutting down a tree which they saw wild elephants worshiping, discovered that it contained an image of shiva, and that the elephants were rishis transformed. The tree being miraculously restored, all obtained mōksha and the place was named Tala-kādu, which was translated into Sanskrit as Dala-vana. Two stone images declared to represent the brothers are pointed out in front of the temple Veerabadra swamy. In a later age, Rāma is said to have halted here on his expedition to Lanka.

The earliest authentic mention of the city of Talekād or Talakādu, in Sanskrit Dalavana-pura, is in connection with the Ganga line of kings. Harivarma, who has been assigned to find a place (247-266 A.D) was, according to an old chronicle, installed at Skandapura (said to be Gajalhatti, in the Coimbatore country, near where the Moyār flows into the Bhavāni), but resided in the great city of Dalavanapura in the Karnāta-dēsa. Thenceforward Talkād became the capital these powerful sovereigns and there the subsequent kings of that line were crowned.

At the beginning of the 11th century, the Gangas succumbed to the Chōlas, who captured Talkād and gave it the name of Rājarājapura. But about a hundred years later it was taken by the Hoysala king Vishnuvardhana, who drove the Chōlas out of Mysore. After this time we find that Talkād was composed of seven towns and five mathas or monastic establishments. The town of Māyilangi or Malingi, on the opposite side of the river, was also a large place, and had the name of Jananāthapura. Down to the middle of the 14th century, it remained a possession of the Hoysalas, and then passed into the hands of a feudatory of the Vijayanagar sovereigns, whose line appears to be known as that of Sōma-Rāja.

In 1610 it was conquered by the Mysore Rāja under the following circumstances. Tirumala-Rāja, sometimes called Srī Ranga Rāya, the representative of the Vijayanagar family at Seringapatam (Srirangapatna), being afflicted with an incurable disease, came to Talkād for the purpose of offering sacrifices in the temple of Vaidyēsvara. His second wife Alamelamma was left in charge of the Government of Srirangagapattanam ; but she, hearing that her husband was on the point of death, soon after left for Talkād with the object of seeing him before he died, handing over Srirangapattanam and its dependencies to Rāja Wodeyar of Mysore, whose dynasty ever since retained them. It appears that Rāja Wodeyar had been desirous of possessing the jewels which was the property of the Rāni, and being unable to obtain them, and eager to seize at any pretext, he levied an army and proceeded against the Rani. Rāni Alamelamma thereupon went to the banks of the Cauvery, and throwing in the jewel, drowned herself opposite Mālangi, at the same time uttering a three-fold curse,-"Let Talakād become sand ; let Mālangi become a whirlpool ; let the Mysore Rājas fail to beget heirs." The latter part continues to affect the royal family.

Talakadu is also tagged to the curse called “Curse of Talakadu” by Alamelamma on the Wodeyar dynasty (erstwhile Maharajas) of Mysore.[2]

The Talakadu curse has established itself in the folklore as a miracle since the early part of the 16th century because of two strange events visible even to date: (i) Talakadu, a historically vibrant city, is now being submerged under sand dunes several meters deep, and (ii) the Mysore royal family have faced a problem of having a rightful heir to the throne since the 17th century. Both these events linked to an apparent curse by a pious lady (Alamelamma) have defied logic. Based on the data from diverse sources and field studies, K. N. Ganeshaiah has reconstructed the possible chronology of events of this acclaimed miracle. Ganeshaiah argues that the Talakadu phenomenon represents an ecological disaster unintentionally wrought on to a vibrant civilization at this place. In this sense, the curse per se is an intelligently inserted story set as an overlay. Using the example, Ganeshaiah discusses the possible process through which the miracles or myths of this kind survive in a society.[3]

The curse of Talakadu - "Talakadu Maralagi, Malangi Maduvagi, Mysooru Arasarige Makkalagadirali"- the female Alamelamma cursed this way. (translation- ")May Talakadu be filled with Sand, Malangi be a Whirlpool and Mysore Kings shall not have offsprings")

The following is what is known as the curse of Talkād, in the original:-

The old city Talkād is completely buried beneath the hills of sand stretching for nearly a mile in length, only the tops of two pagodas being visible. The sand hills used to advance upon the town at the rate of 9 or 10 feet a year, principally during the south-west monsoon and as they pressed it close on three sides. The inhabitants of Talkād were constantly forced to abandon their houses and retreat further inland. The town, however, is increasing in population, owing to the rich wet cultivation in the neighbourhood, derived from the Mādhavamantri anicut and channel. More than thirty temples, it is stated, are beneath the sand, but the Kírti Nārāyana temlpe has been successfully excavated. The most imposing temple left uncovered by the sand is that of vydyanatheshwara temple.

In the early part of the last century two temples Ānandēsvara and Gaurisankara, were unearthed. Four fragmentary records were found on the outer walls of the Pātālēsvara temple. One of these is an old inscription in Kannada of the Ganga period, the others being in Tamil. The Ānandēsvara temple is said to have been built by one Chidānandasvāmi, a contemporary of Haidar. A story is related to that of the Svāmi that he once crossed the Cauvery in full flood seated on a plantain leaf and that Haidar who witnessed the miracle greatly honoured him and made a grant of land for the temple founded by him. A Kannada inscription at the Gaurisankara temple tells us that this temple was built during the reign of the Mysore king Chikka-Dēva-Rāja-Wodeyar (1672–1704).

[1][4] The Hoysala ruler, Vishnuvardhana, conquered the Gangas and Talakadu. He built the impressive Vijayanarayana Chennakesava Temple at Belur.[5]

Several other interesting legends also surround this shrine. It is believed that an ascetic Somadatta headed out to Siddharanya Kshetra Talakadu to worship Shiva. Having been killed by wild elephants en route, he and his disciples re-incarnated as wild elephants and worshipped Shiva in the form of a tree at Talakadu.

Two hunters Tala and Kada, are believed to have struck the tree with an axe to find blood gushing forth, and upon the bidding of a heavenly voice, dressed the wound of the tree with the tree's leaves and fruits. The tree healed, and the hunters became immortal. Since Shiva is believed to have healed himself through this incident, he is referred to as Vaidyeshwara. The Panchalingams here are all associated with this legend.[6] 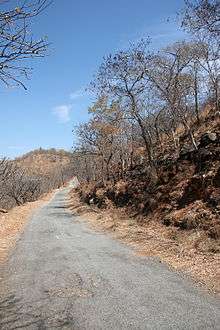 This sleepy little town is at the epicenter of some of the latest advances in horticulture and wine making. Often referred to as Bangalore's Gourmet Valley by name Cauvery Valley, it is still a secret many chefs choose not to share. Fine wines, exotic Zero Pesticide fresh produce, artisan cheese and diverse culinary experiences are changing this once sleepy hamlet.

At Talakadu sand covers the temples. Stone pillars, square at the base and made to fit into a wheel below the abacus, lie scattered about.[1] Among the temples of Talakadu, the Pathaleshwara, Maruleshwara, Arkeshwara, Vaidyanatheshwara and Mallikarjuna temples, the five Lingams believed to represent the five faces of Shiva, form the Pancha pathi and have become famous.[4][7] In honour of these five Shiva temples, a fair is held once every 12 years called Panchalinga Darshana, last held in 2009. The Panchalinga Darshana is held on a new moon day in the month of Karthika when two stars conjoin, the stars of Khuha Yoga and Vishaka. On this day, tradition has it that pilgrims should first bathe in the Gokarna theertham, worship Gokarneswara and Chandikadevi, and then worship Vaidyeshwara, and then bathe in the northern eastern southern and western stretches of the Kaveri and then worship Arkeshwara, Pataleshwara, Maraleshwara and Mallikarjuna, returning to Vaidyeshwara after each worship, finally worship Kirtinarayana and conclude the pilgrimage in one day.[6]