The matha area resembles a living ashram, a holy place for daily devotion and living. Surrounding the Sri Krishna Matha are several temples namely the Udupi Anantheshwara Temple which is over a 1,000 years old. (See Udupi for more) 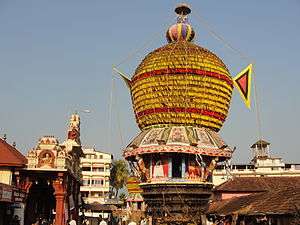 The Krishna Matha was founded by the Vaishnavite saint Shri Madhwacharya in the 13th century. He was the founder of the Dvaita school of Vedanta. It is believed that Madhwacharya found the murti of Sri Krishna in a large ball of gopichandana.

As told by Sri Madhwacharya, in his Tantrasara Sangraha, the murti is placed Pashchimabhimukha. All the other murtis in other Ashta mutts are facing Western side as well. Once Kanakadasa, a pious worshipper and devotee of Lord Krishna, was staying in a makeshift hermitage in front of Krishna mutt. Despite him being a ardent devotee of Lord Krishna, he was not allowed to enter the temple as he was an untouchable. However, pleased with his devoutness, the idol facing the direction of east turned to west and there was a crack in the wall wide enough for Kanakadasa to have darshana of the murti. Even today the devotees worship Lord Krishna through this window. It is known as Kanakanakhindi, and is decorated by an arch named after him. A statue has also been erected. A similar window covers the immediate front of the murti and is called Navagraha kindi. It is often mistaken to be Kanakana kindi.

The temple opens by 5.30 in the morning. The unique feature of the temple is that the deity is worshipped through the silver plated window with nine holes (Navagraha kindi).[1] The temple also offers prasadam (lunch) in the noon.

Direct students of Madhwacharya were many. His first disciple was Shri Sathya Theertha. All other mathas except the Ashta mathas were established by Sri Padmanabha Thirtha. His disciples do not have the right to perform pooja to Lord Udupi Shri Krishna as it is headed and governed by the Ashta mathas.

The daily sevas (offerings to god) and administration of the Krishna Mutt are managed by the Ashta Mathas (eight monastries). Each of the Ashta Mathas performs temple management activities for two years in a cyclical order. They are collectively known as the Ashta Mathagalu in Kannada language.

The Krishna Matha is known throughout the world for its religious customs, traditions, and learning in Dvaita or Tatvavaada philosophy. It is also the centre of Daasa Sahitya, a form of literature that originated in Udupi.

Swamijis of the Ashta Mathas

The swamijis of the Ashta Mathas and their successors are given as below:

During the Paryaya festival, held every two years, the temple management is handed over to the next Matha. Each of the Mathas is headed by a Swami, who will be in charge of the temple during his Paryaya. The Paryaya is held on even years like 2008, 2010 and 2012. Festivals like Makara Sankranthi, Ratha Sapthami, Madhva Navami, Hanuma Jayanthi, Sri Krishna Janmashtami, Navarathi Mahotsava, Madhva Jajanti (Vijaya Dashami), Naraka Chathurdashi, Deepavali, Geetha Jayanthi etc. are celebrated very grandly by Paryaya Mutt every year.