The 906th Air Refueling Squadron is an active United States Air Force unit. It is an active associate squadron and part of the 375th Air Mobility Wing at Scott Air Force Base, Illinois.

The 906th Air Refueling Squadron was activated as part of Strategic Air Command's nuclear deterrent force. It maintained aircraft on alert throughout the Cold War. The squadron deployed aircrews and aircraft to support combat operations in Southeast Asia from the mid 1960s through the early 1970s. It also supported numerous contingency operations from its bases in the northern United States and forward operating locations until moving to Scott in 2009 and becoming an active associate unit of the Illinois Air National Guard.

The first predecessor of the 906th Air Refueling Squadron was established as the 16th Reconnaissance Squadron. It was assigned to the 3d Bombardment Wing,[1] but was under the operational control of the 42d Bombardment Group, to which it was assigned the following year. The squadron drew its cadre from the 88th Reconnaissance Squadron and was equipped with a mixture Douglas B-18 Bolos, Lockheed A-29 Hudsons, and a few Martin B-26 Marauder medium bombers.[3][4] After the Japanese attack on Pearl Harbor, the squadron flew antisubmarine patrols over the Pacific until early May 1942.[3] 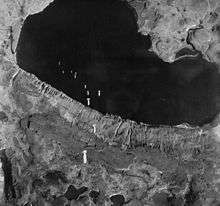 Following Pearl Harbor, military planning called for Alaska to be defended by units based in the Zone of the Interior, which would deploy only their air echelons, which would move forward to Alaska as they were needed. The 42d Bombardment Group was tabbed as one of the units to deploy combat elements to Alaska.[5] The Japanese invasion of the Aleutian Islands showed that permanent units were necessary for Alaskan defense.[6] However, because of other demands, only the 406th and the 77th Bombardment Squadrons of the group deployed to Alaska, where they were attached to the 28th Composite Group.[3][7] The squadron continued antisubmarine operations in the Gulf of Alaska[8] and detachments of the squadron flew combat missions during the Aleutian Campaign from forward bases on Adak and Amchitka with North American B-25 Mitchells, attacking enemy targets on Dutch Harbor that helped force the withdrawal of enemy ships and on Kiska until the Japanese withdrew from the island.[9][10] The squadron returned to the Continental United States in late 1943 and was briefly assigned to Fourth Air Force.[3]

B-24 Liberator equipped for Carpetbagger missions

The squadron moved on paper to the European Theater of Operations in November where it was organized from crews and aircraft formerly assigned to the 479th Antisubmarine Group. The 406th received its cadre at RAF Alconbury from the ground echelon of the 4th Antisubmarine Squadron and the air echelon of the 22d Antisubmarine Squadron,[11] which had been disbanded at RAF Podington.[12] The squadron was equipped with modified B-24Ds that had been stripped of armament except for the tail turret.[11] The aircraft were painted gloss black overall and the openings left by the removal of the gun turrets from their bellies were used by agents being dropped by parachute. In addition, plexiglass bubbles were added to the cockpit side windows to improve visibility for the pilots.[13]

Safe conduct pass, probably the most successful Allied propaganda leaflet of the war

The unit flew its first Carpetbagger mission to drop supplies to members of the Resistance in Occupied Europe under the guidance of the Royal Air Force (RAF) in early January.[11] In April the squadron moved to RAF Harrington, which was near RAF Tempsford, where the RAF was engaged in similar activities.[13] Carpetbagger missions also began to include the infiltration of agents with most missions flown over occupied France and the low countries. In August 1944 the squadron transferred its personnel and equipment to the 858th Bombardment Squadron[13] of the 492d Bombardment Group, which assumed the Carpetbagger mission.[11]

When the 492d took over the Carpetbagger mission, its 858th Bombardment Squadron, which was engaged in psychological warfare against Nazi Germany, joined it at RAF Harrington.[14] The 406th moved on paper to RAF Cheddington and took over the dozen Boeing B-17 Flying Fortresses of the 858th. These aircraft used laminated paper leaflet bombs that burst at one to two thousand feet above the ground and could accurately deliver 80,000 leaflets. As the squadron assumed its new mission in August 1944, the pace of missions accelerated to about eight per night. Squadron strength expanded to 24 aircraft and the B-17s were replaced by B-24s by the end of the year. The squadron flew these missions over France, Germany, Norway and the low countries. After the surrender of Germany in May 1945, the squadron continued flying missions for the Office of Strategic Services.[15] Just under two billion leaflets were delivered by the night leaflet unit.[16]

In July 1945, the unit returned to the United States, where it was redesignated as a very heavy bombardment squadron. The war in the Pacific Theater ended and the squadron was inactivated in October 1945.[3]

In 1959 the Air Force assigned the 906th Air Refueling Squadron to Strategic Air Command (SAC), which organized it at Minot Air Force Base, North Dakota in June, where it was assigned to the 4136th Strategic Wing.[17] The 4136th wing was established by SAC in a program to disperse its Boeing B-52 Stratofortress bombers over a larger number of bases, thus making it more difficult for the Soviet Union to knock out the entire fleet with a surprise first strike.[18] The squadron received its first Boeing KC-135 Stratotanker on 23 September 1959 and was judged to be combat ready on 31 October.[19] Starting in 1960, one third of the squadron's aircraft were maintained on fifteen-minute alert, fully fueled and ready for combat to reduce vulnerability to a Soviet missile strike. This was increased to half the squadron's aircraft in 1962.[20] The 4136th (and later the 450th and 5th wings) continued to maintain an alert commitment until the end of the Cold War. The 906th refueled B-52s participating in Operation Chrome Dome,[17] the airborne component of SAC's alert force, until Chrome Dome was terminated in 1968. The squadron's ground alert commitment was increased in the fall of 1962 during the Cuban Missile Crisis, when all available aircraft assumed an alert status.

In February 1963, The 450th Bombardment Wing assumed the aircraft, personnel and equipment of the discontinued 4136th wing. The 4136th was a Major Command controlled (MAJCON) wing, which could not carry a permanent history or lineage,[21] and SAC wanted to replace it with a permanent unit. The 900th was assigned to the newly activated 450th wing.[22] In 1966 the squadron was awarded the Saunders Trophy for outstanding refueling operations.[23]

The squadron deployed aircrews and aircraft to support the Spanish, Great Lakes and Alaskan Tanker Task Forces.[24][25][26] It engaged in worldwide operations supporting combat operations in Southeast Asia from 1968 through 1975 through participation in Operation Young Tiger and support for Operation Arc Light.[1][23][27] Afterwards it continued to support forward based tanker task forces.[28] It supported combat operations in Southwest Asia from 1990 through 1991.[1]

In 1992 the air force reorganized its major commands. As a result, the 906th's parent 5th Operations Group was reassigned to Air Combat Command as a bomber unit, while the 906th became an element of Air Mobility Command (AMC) and was assigned as a geographically separated unit to the 43d Operations Group at Malmstrom Air Force Base.[28] This assignment continued until 1994, when AMC decided to make the 319th Air Refueling Wing one of three "super tanker wings" and transferred the squadron to Grand Forks Air Force Base, North Dakota, where it became the second of four tanker squadrons assigned to the wing's 319th Operations Group.[29][30]

Under AMC control, the unit supported Operation Deny Flight, the United Nations no-fly zone over Bosnia and Herzegovina in 1994 and 1995 from Pisa Airport, Italy and Istres Air Base, France.[31] It supported Operation Uphold Democracy, the United Nations action to remove the military junta and restore the elected president of Haiti in 1995. In 1996 the squadron deployed planes and crews to Riyadh Air Base, Saudi Arabia for Operation Southern Watch, the Southwest Asia Task Force operation to monitor and control airspace in southern Iraq.[31] It also deployed for the sister operation patrolling northern Iraq, Operation Northern Watch.[29]

For three months in the summer of 2000, the squadron was forced to operate from MacDill Air Force Base, Florida as the Grand Forks runways underwent a nine million dollar renovation. For the first time in ten years, following the 9/11 attacks, the squadron once again placed aircraft on alert as part of Operation Noble Freedom and also began support for Operation Enduring Freedom in Afghanistan. Toward the end of the following year, the squadron began to deploy forward in what became Operation Iraqi Freedom, the war in Iraq.[32]

AMC began to prepare for the end of air refueling operations at Grand Forks in preparation for the arrival of Global Hawk unmanned aircraft.[33] As a result, it began to inactivate or transfer the tanker squadrons stationed there. On 2 October 2009 the 906th moved without personnel or equipment from Grand Forks Air Force Base to Scott Air Force Base, Illinois, where it was assigned to the 375th Air Mobility Wing as an active associate unit with the 126th Air Refueling Wing of the Illinois Air National Guard. The 375th maintains administrative control of the squadron, while the 126th has operational control. The airmen of the 906th operate and maintain the aircraft of the 126th wing's 108th Air Refueling Squadron.[2]