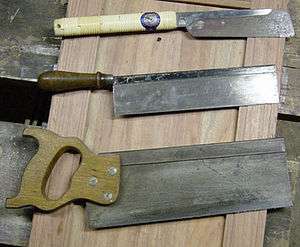 A backsaw is any hand saw which has a stiffening rib on the edge opposite the cutting edge, allowing for better control and more precise cutting than with other types of saws. Backsaws are normally used in woodworking for precise work, such as cutting dovetails, mitres, or tenons in cabinetry and joinery. Because of the stiffening rib, backsaws are limited in the depth to which they can cut. Backsaws usually have relatively closely spaced teeth, often with little or no set.

Backsaws include the tenon saw, the dovetail saw, and the (United Kingdom) sash saw1. Tenon and dovetail saws usually have a pistol grip style handle which may be open or closed at the bottom.

Different types of backsaw include:

Flush-cutting Backsaw, handle can be turned to the other side

The work of a backsaw requires a thin, stiff blade. These two immediately incompatible requirements are resolved by swaging (and perhaps, spot welding) a stiffening cap over the length of the top edge of the blade. This thickening of the blade is the back and is generally made from some kind of metal, usually brass or steel. The stiffening back is carried through into the handle so that the blade does not bend between the two. The thickening of the back limits the depth to which the saw can cut but this is generally not a limitation in their typical uses.