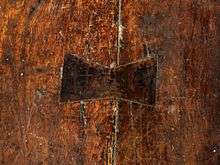 A Dovetail key , Dutchman Joint, or Butterfly joint is a type of joint used either to hold two or more wooden boards together or to keep two halves of a board that have already started to split from splitting further. They may also be used to stabilize the core of a knothole, preventing it from dropping out over time. They are also commonly used as decorative inlays for non structural aesthetic purposes. [1]

A Dovetail Key resembles two dovetails connected at the narrow part. A negative of the hole is cut out of the board the butterfly will be placed in and the butterfly is then fitted, keeping the joint together. The wood used for the butterfly is usually a contrasting wood, often walnut.

Dovetail keys or Butterfly joints have been used both in decorative and structural joints since ancient times. They were prominently used in construction of the Cairo Dahshur Boats, a type of Khufu ship from the Egyptian middle kingdom. [2] [3] They were also historically used in repairing cracks in dutch tabletops in the 18th century. This is where the term Dutchman joint originates. The dovetail key was installed across the crack to stabilize and inhibit further movement of the crack.

Contemporary decorative dovetail keys are commonly seen in and associated with the work of George Nakashima.[4]

This article is issued from Wikipedia - version of the 5/20/2015. The text is available under the Creative Commons Attribution/Share Alike but additional terms may apply for the media files.