Walnut trees are any species of tree in the plant genus Juglans, the type genus of the family Juglandaceae, the seeds of which are referred to as walnuts. All species are deciduous trees, 10–40 metres (33–131 ft) tall, with pinnate leaves 200–900 millimetres (7.9–35.4 in), with 5–25 leaflets; the shoots have chambered pith, a character shared with the wingnuts (Pterocarya), but not the hickories (Carya) in the same family.

The common name walnut derives from Old English wealhhnutu, literally 'foreign nut' (from wealh 'foreign' + hnutu 'nut'),[2] because it was introduced from Gaul and Italy.[3] The Latin name for the walnut was nux Gallica, "Gallic nut".

The generic name comes from Latin jūglans, meaning 'walnut, walnut tree'; jūglans in turn is a contraction of Jōvis glans, 'nut of [the god] Jupiter'.[4][5]

Tradition has it that a walnut tree should be beaten. The old saying runs, "A woman, a dog and a walnut tree; the harder they're beaten, the better they be." The saying is believed to originate from the mainland European practice of harvesting by beating with long poles. This would have the added benefits of removing dead wood and stimulating shoot formation.[6]

Walnut is one of the main ingredients of Baklava and Turkish cuisine.

The two most commercially important species are J. regia for timber and nuts, and J. nigra for timber. Both species have similar cultivation requirements and are widely grown in temperate zones.

Walnuts are light-demanding species that benefit from protection from wind. Walnuts are also very hardy against drought.

Interplanting walnut plantations with a nitrogen fixing plant, such as Elaeagnus × ebbingei or Elaeagnus umbellata, and various Alnus species, results in a 30% increase in tree height and girth (Hemery 2001).

When grown for nuts, care must be taken to select cultivars that are compatible for pollination purposes; although some cultivars are marketed as "self fertile", they will generally fruit better with a different pollination partner. Many different cultivars are available for growers, and offer different growth habits, flowering and leafing, kernel flavours and shell thicknesses. A key trait for more northerly latitudes of North America and Europe is phenology, with ‘late flushing’ being particularly important to avoid frost damage in spring. Some cultivars have been developed for novel ‘hedge’ production systems developed in Europe and would not suit more traditional orchard systems.

The leaves and blossoms of the walnut tree normally appear in spring. The male cylindrical catkins are developed from leafless shoots from the past year; they are about 10 cm (3.9 in) in length and have a large number of little flowers. Female flowers appear in a cluster at the peak of the current year’s leafy shoots.[9]

The fruits of the walnut are a type of accessory fruit known as a pseudodrupe (or drupe-like nut), the outer covering of the fruit is an involucre - in a drupe the covering would be derived from the carpel.[10]

The nut kernels of all the species are edible, but the walnuts most commonly traded are from the J. regia, the only species which has a large nut and thin shell. J. nigra kernels are also produced commercially in the US.

Two-thirds of the world export market[11][12] and 99% of the US commercial production of English walnuts is grown in California's Central Valley and in Coastal Valleys, from Redding in the north to Bakersfield in the south.[13] Of the more than 30 varieties of J. regia grown there, Chandler and Hartley account for over half of total production.[12] In California commercial production, the Hinds' black walnut (J. hindsii) and the hybrid between J. hindsii and J. regia, Juglans x Paradox, are widely used as rootstocks for J. regia cultivars because of their resistance to Phytophthora and to a very limited degree, the oak root fungus. However, trees grafted on these rootstocks often succumb to black line.[14]

In some countries, immature nuts in their husks are preserved in vinegar. In the UK, these are called pickled walnuts and this is one of the major uses for fresh nuts from the small scale plantings. In Armenian cuisine, unripe walnuts, including husks, are preserved in sugar syrup and eaten whole. In Italy, liqueurs called Nocino and Nocello are flavoured with walnuts, while Salsa di Noci (walnut sauce) is a pasta sauce originating from Liguria. In Georgia, walnuts are ground with other ingredients to make walnut sauce.

Walnuts are heavily used in India. In Jammu, it is used widely as a prasad (offering) to Mother Goddess Vaisnav Devi and, generally, as a dry food in the season of festivals such as Diwali.

The nuts are rich in oil, and are widely eaten both fresh and in cookery. Walnut oil is expensive and consequently is used sparingly; most often in salad dressings. Walnut oil has been used in oil paint, as an effective binding medium, known for its clear, glossy consistency and nontoxicity. 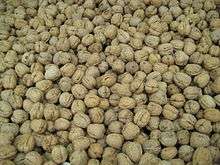 The shells of walnuts

The walnut shell has a wide variety of uses. Eastern black walnut (J. nigra) shell is the hardest of the walnut shells, and therefore has the highest resistance to breakdown. 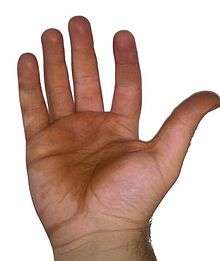 Staining from handling walnuts with husks

Walnut husks are often used to create a rich yellow-brown to dark brown dye used for dyeing fabric and for other purposes. The dye does not require a mordant and will readily stain the hand if picked without gloves.

The common walnut and the black walnut and its allies, are important for their attractive timber, which is hard, dense, tight-grained and polishes to a very smooth finish. The colour ranges from creamy white in the sapwood to a dark chocolate colour in the heartwood. When kiln-dried, walnut wood tends toward a dull brown colour, but when air-dried can become a rich purplish-brown. Because of its colour, hardness and grain, it is a prized furniture and carving wood. Walnut burls (or 'burrs' in Europe) are commonly used to create bowls and other turned pieces. Veneer sliced from walnut burl is one of the most valuable and highly prized by cabinet makers and prestige car manufacturers. Walnut wood has been the timber of choice for gun makers for centuries, including the Gewehr 98 and Lee–Enfield rifles of the First World War. It remains one of the most popular choices for rifle and shotgun stocks, and is generally considered to be the premium – as well as the most traditional – wood for gun stocks, due to its resilience to compression along the grain. Walnut is also used in lutherie and for the body of Pipe organs. The wood of the butternut and related Asian species is of much lower value, softer, coarser, less strong and heavy, and paler in colour.

In North America, forestry research has been undertaken mostly on J. nigra, aiming to improve the quality of planting stock and markets. In some areas of the US, black walnut is the most valuable commercial timber species.[16] The Walnut Council[17] is the key body linking growers with scientists. In Europe, various EU-led scientific programs have studied walnut growing for timber.[18]

Walnuts are considered to be an herb in traditional Chinese medicine.

Walnuts are very attractive trees in parks and large gardens. Walnut trees are easily propagated from the nuts. Seedlings grow rapidly on good soils.[16] The Japanese walnut in particular is known for its huge leaves, which have a tropical appearance. 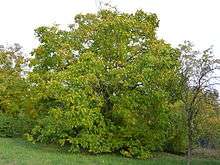 Walnut tree in a garden

As garden trees, they have some drawbacks, in particular the falling nuts, and the releasing of the allelopathic compound juglone, though a number of gardeners do grow them.[19][20] However, different walnut species vary in the amount of juglone they release from the roots and fallen leaves - J. nigra, in particular, is known for its toxicity, both to plants and horses.[21] Juglone is toxic to plants such as tomato, apple, and birch, and may cause stunting and death of nearby vegetation. Juglone appears to be one of the walnut's primary defence mechanisms against potential competitors for resources (water, nutrients and sunlight), and its effects are felt most strongly inside the tree's "drip line" (the circle around the tree marked by the horizontal distance of its outermost branches). However, even plants at a seemingly great distance outside the drip line can be affected, and juglone can linger in the soil for several years even after a walnut is removed as its roots slowly decompose and release juglone into the soil.

Walnuts are used as food plants by the larvae of some Lepidoptera species. These include:

The nuts are consumed by other animals, such as mice and squirrels.

In California and Geneva (Switzerland), ravens have been witnessed taking walnuts into their beaks, flying up to 60 feet or so in the air, and dropping them to the ground to crack the shells and eat the nut inside.

As a nutrient-dense food, walnuts are an excellent source of protein, dietary fiber, B vitamins, and several dietary minerals, particularly manganese.[22]

The genus Juglans is divided into four sections.[23]

The best-known member of the genus is the Persian walnut (J. regia, literally "royal walnut"), native from the Balkans in southeast Europe, southwest and central Asia to the Himalaya and southwest China. Walnuts are a traditional feature of Iranian cuisine; the nation has extensive orchards which are an important feature of regional economies. In Kyrgyzstan alone, there are 230,700 ha of walnut-fruit forest, where J. regia is the dominant overstory tree (Hemery and Popov 1998). In non-European English-speaking nations, the nut of the J. regia is often called the "English walnut"; in Great Britain, the "common walnut."

The eastern black walnut (J. nigra) is a common species in its native eastern North America, and is also widely cultivated elsewhere. The nuts are edible, and though they are often used in expensive baked goods, the Persian walnut is preferred for everyday use because it is easier to extract the nutmeat. The wood is particularly valuable. 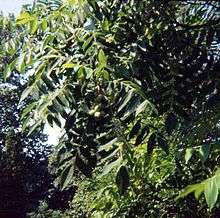 The Japanese walnut (J. ailantifolia) is similar to butternut, distinguished by the larger leaves up to 90 cm long, and round (not oval) nuts. The variety cordiformis, often called the heartnut has heart-shaped nuts; the common name of this variety is the source of the sectional name Cardiocaryon.

The butternut (J. cinerea) is also native to eastern North America, where it is currently endangered by an introduced disease, butternut canker, caused by the fungus Sirococcus clavigignenti-juglandacearum. Its leaves are 40–60 cm long, the fruits are oval, the shell has very tall, very slender ridges, and the kernel is especially high in fat.

The paper presenting these results did not publish any new names for the subdivisions of sect. Rhysocaryon, for any combinations of the other sections, or for J. olanchana var. standleyi.