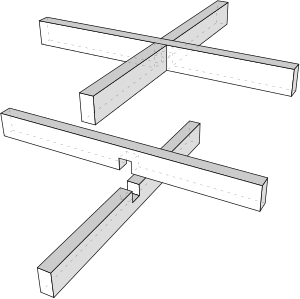 The simple halved joint is created by cutting a slot in opposite edges of the members to be joined so that they slip together. Most commonly, the amount of material removed is equal to half the width of the members being joined, although this depends on the relative dimensions of the members. This joint is relatively weak and prone to splitting, due to the lack of shoulders which would otherwise prevent twisting.[1] When extra strength is required, a strengthened version of the joint is called for. This involves a more elaborate cut out which incorporates shoulders to prevent twisting of the joint.

Halved joints can be cut by the following methods: