Calocedrus (common name incense cedar, alternatively spelled incense-cedar) is a genus of coniferous trees in the cypress family Cupressaceae first described as a genus in 1873.[2][3] It is native to eastern Asia and western North America.[1] The generic name means "beautiful cedar".

The genus is related to the Thuja, and has similar overlapping scale-leaves. Calocedrus differs from Thuja in the scale leaves being in apparent whorls of four (actually opposite decussate pairs like Thuja, but not evenly spaced apart as in Thuja, instead with the successive pairs closely then distantly spaced), and in the cones having just 2–3 pairs of moderately thin, erect scales, rather than 4–6 pairs of very thin scales in Thuja. 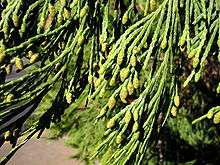 Calocedrus decurrens, California incense cedar (syn. Libocedrus decurrens), is native to western North America, with the bulk of the range in the United States, from King County in Washington, through central western Oregon and most of California as well as Washoe County the extreme west of Nevada, and also a short distance into northwest Mexico in northern Baja California.[4] It is a large tree, typically reaching heights of 40–60 m and a trunk diameter of up to 3 m (maxima, 69 m tall and 3.9 m diameter), and with a broad conic crown of spreading branches. The leaves are bright green on both sides of the shoots, and the cones 2–2.5 cm long. It is by far the most widely known species in the genus, and is often simply called "incense cedar" without the regional qualifier. This tree is the preferred host of a wood wasp, Syntexis libocedrii which lays its eggs in the smoldering wood immediately after a forest fire. The epithet decurrens is the present participle of dēcurrō, meaning running or flowing down.[5][6][7][8][9]

Calocedrus formosana, Taiwan incense cedar, is endemic to Taiwan. It is very similar to C. macrolepis, and some botanists treat it as a variety of that, C. macrolepis var. formosana. It is a medium-sized tree, growing to 25–30 m tall, and is rare in the wild, occurring only as scattered trees in mixed forests. The leaves are glaucous green on the upper side of the shoots, and conspicuously marked with bright white stomatal patches on the underside. The cones are 1.5–2 cm long, carried on a 1–1.5 cm stem.[10]

Calocedrus macrolepis, Chinese incense cedar, is native to southwest China from Guangdong west to Yunnan, and also in northern Vietnam, northern Laos, extreme northern Thailand and northeastern Myanmar (Burma). It is also a medium-size tree to 25–30 m tall, and like C. formosana, is rare in the wild. The leaves and cones are similar to C. formosana, differing most obviously in the shorter cone stem, only 0.5 cm long.[11]

Calocedrus rupestris, the most recently discovered living species of Calocedrus, was identified in Vietnam and first described in 2004. It occurs exclusively on rocky limestone (karst) terrain, a habitat that has a very high level of endemism. The close proximity of these populations to the Chinese and Laotian borders indicates that the species may occur in those countries as well. It is an evergreen, monoecious tree up to 25 m tall with a broadly rounded crown. The epithet "rupestris" means "rock-dwelling".[12][13]

The wood of Calocedrus is soft, moderately decay-resistant, and with a strong spicy-resinous fragrance. That of C. decurrens is the primary material for wooden pencils, because it is soft and tends to sharpen easily without forming splinters. The two Asian species were (at least in the past) in very high demand for coffin manufacture in China, due to the scent of the wood and its decay resistance. It is likely that past over-exploitation is responsible for their current rarity.

Incense cedar was the preferred hearth board of the Native Peoples of Northern California for lighting fires by friction .

Calocedrus decurrens, the California incense cedar, is a popular ornamental tree, grown particularly in locations with cool summer climates like Britain, Washington and British Columbia. Its very narrow columnar crown in landscape settings, an unexplained consequence of the climatic conditions in these areas, is not shown by trees in their native 'wild' habitat. The California incense cedar is also valued for its drought tolerance. The Asian species are rarely cultivated.[14]

This article is issued from Wikipedia - version of the 10/3/2015. The text is available under the Creative Commons Attribution/Share Alike but additional terms may apply for the media files.