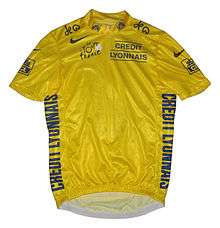 A cycling jersey is a specialized jersey (shirt) for cycling. While the vast majority of cyclists worldwide wear conventional clothing while riding, a jersey offers certain advantages for the sport-oriented cyclist. A cycling jersey is cut long in the back to accommodate the bent-over position used in sport-oriented cycling. Any pockets on the jersey are placed on the back panel as front pockets would tend to spill. The zipper is often made very long so that the cyclist can open up the jersey to allow for ventilation. The cycling jersey is usually worn with a tight fit in order to reduce air resistance. Jerseys are made from a material designed to wick moisture from the skin, keeping the cyclist cooler and more comfortable.

Professional cycling is heavily sponsored; the traditional cycling jersey is printed with the logos of a few of the cycling team's sponsors.

The best known jerseys are probably the yellow jersey, or maillot jaune, from the Tour de France, the pink jersey, or maglia rosa, from the Giro d'Italia, and the red jersey, or la roja, from the Vuelta de Espana. The first two jerseys were given the same color as the paper their original main sponsors (both sports newspapers) were printed on: yellow and pink paper, respectively. The overall leader at the Vuelta at present wears a red jersey, although previously it has been the "maillot amarillo" (yellow jersey) and the "jersey de oro" (golden jersey). Many other jerseys are colored or designed after a sponsor's logo, and some jerseys change color when a new sponsor is found.