The parts of a flower 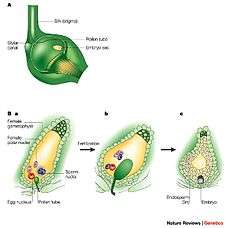 Double fertilization is a complex fertilization mechanism of flowering plants (angiosperms). This process involves the joining of a female gametophyte (megagametophyte, also called the embryo sac) with two male gametes (sperm). It begins when a pollen grain adheres to the stigma of the carpel, the female reproductive structure of a flower. The pollen grain then takes in moisture and begins to germinate, forming a pollen tube that extends down toward the ovary through the style. The tip of the pollen tube then enters the ovary and penetrates through the micropyle opening in the ovule. The pollen tube proceeds to release the two sperm in the megagametophyte.

The two central cell maternal nuclei (polar nuclei) that contribute to the endosperm, arise by mitosis from the same single meiotic product that gave rise to the egg. The maternal contribution to the genetic constitution of the triploid endosperm is double that of the embryo.

In a recent study done of the plant Arabidopsis thaliana, the migration of male nuclei inside the female gamete, in fusion with the female nuclei, has been documented for the first time using in vivo imaging. Some of the genes involved in the migration and fusion process have also been determined.[2]

Evidence of double fertilization in Gnetales, which are non-flowering seed plants, has been reported.[3]

Double fertilization was discovered more than a century ago by Sergei Nawaschin in Kiev,[4] Russian Empire, and Léon Guignard in France. Each made the discovery independently of the other.[5] Lilium martagon and Fritillaria tenella were used in the first observations of double fertilization, which were made using the classical light microscope. Due to the limitations of the light microscope, there were many unanswered questions regarding the process of double fertilization. However, with the development of the electron microscope, many of the questions were answered. Most notably, the observations made by the group of W. Jensen showed that the male gametes did not have any cell walls and that the plasma membrane of the gametes is close to the plasma membrane of the cell that surrounds them inside the pollen grain.[6]

The female gametophyte, the megagametophyte, that participates in double fertilization in angiosperms is sometimes called the embryo sac. This develops within an ovule, enclosed by the ovary at the base of a carpel. Surrounding the megagametophyte are (one or) two integuments, which form an opening called the micropyle. The megagametophyte, which is usually haploid, originates from the (usually diploid) megaspore mother cell, also called the megasporocyte. The next sequence of events varies, depending on the particular species, but in most species, the following events occur. The megasporocyte undergoes a meiotic cell division, producing four haploid megaspores. Only one of the four resulting megaspores survives. This megaspore undergoes three rounds of mitotic division, resulting in seven cells with eight haploid nuclei (the central cell has two nuclei, called the polar nuclei). The lower end of the embryo sac consists of the haploid egg cell positioned in the middle of two other haploid cells, called synergids. The synergids function in the attraction and guidance of the pollen tube to the megagametophyte through the micropyle. At the upper end of the megagametophyte are three antipodal cells.

The male gametophytes, or microgametophytes, that participate in double fertilization are contained within pollen grains. They develop within the microsporangia, or pollen sacs, of the anthers on the stamens. Each microsporangium contains diploid microspore mother cells, or microsporocytes. Each microsporocyte undergoes meiosis, forming four haploid microspores, each of which can eventually develop into a pollen grain. A microspore undergoes mitosis and cytokinesis in order to produce two separate cells, the generative cell and the tube cell. These two cells in addition to the spore wall make up an immature pollen grain. As the male gametophyte matures, the generative cell passes into the tube cell, and the generative cell undergoes mitosis, producing two sperm cells. Once the pollen grain has matured, the anthers break open, releasing the pollen. The pollen is carried to the pistil of another flower, by wind or animal pollinators, and deposited on the stigma. As the pollen grain germinates, the tube cell produces the pollen tube, which elongates and extends down the long style of the carpel and into the ovary, where its sperm cells are released in the megagametophyte. Double fertilization proceeds from here.[9]