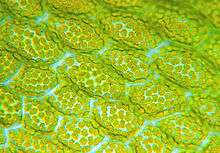 Chloroplasts in leaf cells of the moss Mnium stellare

Plant anatomy or phytotomy is the general term for the study of the internal structure of plants. While originally it included plant morphology, which is the description of the physical form and external structure of plants, since the mid-20th century the investigations of plant anatomy are considered a separate, distinct field, and plant anatomy refers to just the internal plant structures.[1][2] Plant anatomy is now frequently investigated at the cellular level, and often involves the sectioning of tissues and microscopy.[3]

Plant anatomy is often[4] divided into the following categories: 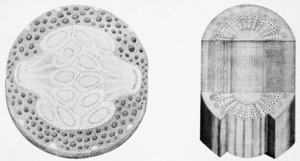 Vascular tissue of a gooseberry vine from Grew's Anatomy of Plants 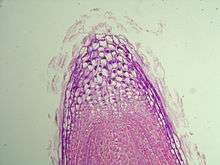 About 300 BC Theophrastus wrote a number of plant treatises, only two of which survive, Enquiry into Plants (Περὶ φυτῶν ἱστορία), and On the Causes of Plants (Περὶ φυτῶν αἰτιῶν). He developed concepts of plant morphology and classification, which did not withstand the scientific scrutiny of the Renaissance.

A Swiss physician and botanist, Gaspard Bauhin, introduced binomial nomenclature into plant taxonomy. He published Pinax theatri botanici in 1596, which was the first to use this convention for naming of species. His criteria for classification included natural relationships, or 'affinities', which in many cases were structural.

It was in the late 1600s that plant anatomy became refined into a modern science. Italian doctor and microscopist, Marcello Malpighi, was one of the two founders of plant anatomy. In 1671 he published his Anatomia Plantarum, the first major advance in plant physiogamy since Aristotle. The other founder was the British doctor Nehemiah Grew. He published An Idea of a Philosophical History of Plants in 1672 and The Anatomy of Plants in 1682. Grew is credited with the recognition of plant cells, although he called them 'vesicles' and 'bladders'. He correctly identified and described the sexual organs of plants (flowers) and their parts.[5]

In the Eighteenth Century, Carl Linnaeus established taxonomy based on structure, and his early work was with plant anatomy. While the exact structural level which is to be considered to be scientifically valid for comparison and differentiation has changed with the growth of knowledge, the basic principles were established by Linnaeus. He published his master work, Species Plantarum in 1753.

In 1813 a Swiss botanist, Augustin Pyrame de Candolle, published Théorie élémentaire de la botanique, in which he argued that plant anatomy, not physiology, ought to be the sole basis for plant classification. Using a scientific basis, he established structural criteria for defining and separating plant genera.

In 1838 German botanist Matthias Jakob Schleiden, published Contributions to Phytogenesis, stating, "the lower plants all consist of one cell, while the higher plants are composed of (many) individual cells" thus confirming and continuing Mirbel's work.

A German-Polish botanist, Eduard Strasburger, described the mitotic process in plant cells and further demonstrated that new cell nuclei can only arise from the division of other pre-existing nuclei. His Studien über Protoplasma was published in 1876.

Gottlieb Haberlandt, a German botanist, studied plant physiology and classified plant tissue based upon function. On this basis, in 1884 he published Physiologische Pflanzenanatomie (Physiological Plant Anatomy) in which he described twelve types of tissue systems (absorptive, mechanical, photosynthetic, etc.).

British paleobotanists Dunkinfield Henry Scott and William Crawford Williamson described the structures of fossilized plants at the end of the Nineteenth Century. Scott's Studies in Fossil Botany was published in 1900.

Following Charles Darwin's Origin of Species a Canadian botanist, Edward Charles Jeffrey, who was studying the comparative anatomy and phylogeny of different vascular plant groups, applied the theory to plants using the form and structure of plants to establish a number of evolutionary lines. He published his The Anatomy of Woody Plants in 1917.

The growth of comparative plant anatomy was spearheaded by British botanist Agnes Arber. She published Water Plants: A Study of Aquatic Angiosperms in 1920, Monocotyledons: A Morphological Study in 1925, and The Gramineae: A Study of Cereal, Bamboo and Grass in 1934.[6]

Following World War II, Katherine Esau published, Plant Anatomy (1953), which became the definitive textbook on plant structure in North American universities and elsewhere, it was still in print as of 2006.[7] She followed up with her Anatomy of seed plants in 1960.